This order of the Delhi High Court is a game changer for 2% of India's population- it goes beyond the relief sought. It opens the doors for tens of millions to now avail of health cover, will compel ALL insurance companies to offer health cover to all Persons With Disabilities and puts govt. agencies on notice that their casual and insensitive attitude to the vulnerable will not be tolerated by the courts.

According to the 2011 census India has 26.80 million disabled people, which constitutes 2.21% of its population. This is a staggering number, but both society and the government have done little to take care of their special needs and to smoothen their integration into normal life. One of the areas from which they have been completely excluded is insurance for health cover; it may surprise most readers to learn that insurance companies FLATLY REFUSE to provide health cover to any disabled person, no matter how healthy or medically fit he or she may otherwise be. And this is in spite of the fact that there are laws and international Conventions which explicitly stipulate that they cannot do so, and that there should be no discrimination between the normally abled and disabled person. Not surprisingly, the insurers have been getting away with this malpractice because the Regulators appointed by govt. to protect the interests of the disabled- the Chief Commissioner for Disabilities in the Govt. of India, and the IRDAI (Insurance Regulatory and Development Authority of India) – have failed to do their job and function more like facilitators for Big Capital than arbiters of social justice for one of the most vulnerable sections of society. They, like our society at large, just cannot be bothered.

Which is why the media too has largely ignored a historic and path-breaking judgment just delivered by the Delhi High Court on the 13th December, 2022 that has the potential to exponentially enhance the quality of life of the disabled at one stroke. This order will be a game changer for these 26.80 million people living in the shadows of neglect. But first a little background to this case.

The petitioner in this case (before Hon’ Justice Pratibha Singh of the Delhi High Court) is Saurabh, an investment analyst and consultant. In 2011, at the young age of 26 years, he met with an accident, suffered severe spinal injuries, was diagnosed as a quadriplegic with 80% permanent locomotor and sensory damage, and is now confined to a wheelchair. Though permanently disabled, he has no medical conditions other than those associated with this type of disability, has never been hospitalised for any sickness, and works from home as a very successful financial analyst.

After his recovery, which took almost three years, Saurabh and his father made the rounds of at least half a dozen insurance providers (both public and private) seeking a health cover: ALL of them flatly refused to even consider the case the moment they learnt that he was a disabled person- and they had the cheek to even give that in writing! No medical tests were conducted to determine his health status. Refusing to accept these arbitrary rejections, Saurabh lodged a complaint with the Chief Commissioner of Disabilities who, despite the fact that he draws the salary of a Secretary to Govt., chose to behave like a postman- he simply forwarded the complaint to the IRDAI and notched up another “disposed of” case. 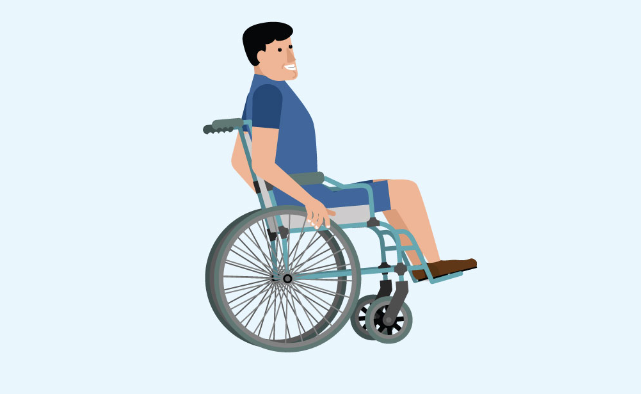 The IRDAI was even more brazen about its insensitivity and crass cronyism. True to sarkari form, it just forwarded Saurabh’s complaint to the insurers. The insurance companies wrote back stating that the refusal was in line with their policies, and the IRDAI simply forwarded back this “explanation” to Saurabh, adding for good measure that the insurers had to consider the commercial aspect when issuing policies, thus giving its stamp of approval to the illegal and unethical actions of the companies. This knock-off Regulator even ignored the fact that the insurance companies were running foul of its own regulations, notified in 2016 and 2020 about providing health cover to the disabled!

It has taken the Delhi High Court to expose this nexus and to re-educate both these agencies. For Saurabh, who appears to have emerged stronger after his ordeal, refused to be another statistic in govt. files and filed a writ in the High Court in 2019 against the refusal of the companies and the unhelpful attitude of the government agencies. The case was argued by Mr. Siddharth Nath of NKR Law Offices, Nizamuddin, New Delhi. And, in a comprehensive order that leaves little scope for any appeal, the Hon’ Judge has practically written out a Magna Carta for the rights of the disabled to obtain health care. She has, inter-alia, ruled that:

* There can be no discrimination against PWDs in the matter of health insurance, regardless of their income and social status. The insurance providers are required to design products for them so as to enable them to obtain health coverage. In a categorical rejection of the stand taken by the insurance companies the Court has observed that “Disability per se cannot be the basis of discrimination in the matter of insurance.”

* In laying down the law for the insurance providers the Court has reminded them of their social responsibility : ” Insurance companies serve an important function and they cannot be permitted to take decisions based solely on their own whims or on the principles of profit maximisation. This reasoning becomes even more relevant when their grossly illegal actions are seen in the context of the Petitioner, a disabled person and one who may not meet their expectation of a highly profitable policy holder but one who in fact needs their services the most.”

* The Court came down heavily on not only the two insurance companies who were parties to the suit ( Max Bupa and Oriental Insurance Co.), but also on the two government regulators, particularly the IRDAI. It noted that even though IRDAI’s regulations of 2016 and 2020 required insurance companies to evolve health insurance policies for PWDs and those suffering from AIDS and mental illness, in practice it has taken no steps to ensure that they are implemented, as the case of Saurabh shows. The Hon’ Judge even commented that the IRDAI should not need to be taught that its circular and other policies are duly given effect to by the insurance companies. In a damning indictment of the Regulator, she observed that ” thus, the IRDAI turned a blind eye to the problem and defended the insurance companies.”

* The Court also took umbrage at the IRDAI describing persons with disabilities as “sub-standard lives” in its regulations, said that this is not acceptable terminology, and directed the Authority to modify it.

* In view of its findings, the Court has asked the two respondent companies to reconsider Saurabh’s application and submit a proposal by the next date of hearing. Even more significantly, it has directed the IRDAI to convene a meeting of all insurance providers and to design a suitable product for PWDs and the other disadvantaged categories, and to introduce them at the earliest.

* All the parties are required to submit a status report on these directions by the next date of hearing i.e. 17th March 2022.

This order of the Delhi High Court is a game changer for 2% of India’s population- it goes beyond the relief sought by Saurabh, beyond the two companies named as respondents, beyond the two govt. Regulators found wanting in this case. It will open the doors for tens of millions to now avail of health cover, it will compel ALL insurance companies to offer health cover to all PWDs, it puts other govt. agencies on notice that their casual and insensitive attitude to the vulnerable will not be tolerated by the courts. It is a refreshing change in an era of general judicial apathy to the rights of the people. Which is why I see this order as a latter day Magna Carta for the disabled in India.

Embedded in this case is an irony which is both poignant and positive- though Saurabh himself cannot walk, he has taken a giant step towards betterment of the quality of life of persons like him.

And by the way, did I mention that Saurabh is my younger son ?