Kurash, an over 3500 years old game of central Asia, is a form of wrestling. 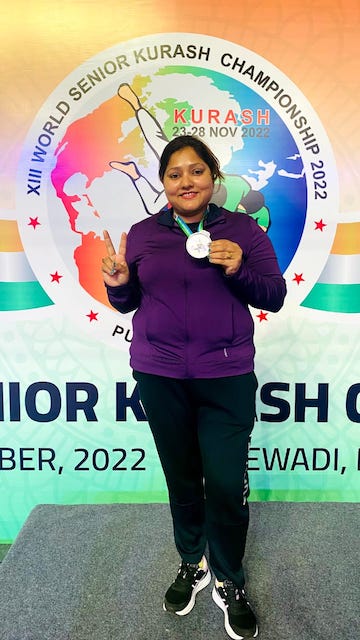 The cop, Sneha Tadyal Lohan, is posted as sub-inspector in Chamoli. She is a lone player from Uttarakhand who participated in the championship.

Uttarakhand DGP Ashok Kumar, who encouraged Sneha to take part in the championship, congratulated her, mentioning her to be a pride of Uttarakhand police.

After defeating rival Sitora Khusanova from Uzbekistan, she secured a silver medal on November 26. Fatemeh Barmaki Kordk of Iran won the gold.

Sneha, whose in-laws hail from Libberheri village near Roorkee, was recruited in state police in 2011 as constable under sports quota. However, Judo has been her basic game since school days but in 2010 she participated Asian Kurash Championship in Thailand and secured a bronze medal.

Whereas in national games she bagged bronze medal in judo in Kerala in 2015. Sneha was promoted as sub-inspector in 2016. She now plays Judo as well as Kurash under 78 kg plus weight category.

The Kurash championship is undergoing from November 23 to 29 at Balewadi stadium where around 450 players from 60 countries are participating. India has sent a delegation of 20 players including 10 women to take part in the championship.

“I owe my success to two persons. One is our DGP Ashok Kumar and another my coach Ravinder Dhaiya,”said the lady cop.

Tapan Susheel is a journalist who writes for Times of India