Shimla: Facing strong winds of anti-incumbency, the BJP leadership in Himachal Pradesh led by Chief Minister Jai Ram Thakur seems to be banking on Prime Minister Narendra Modi’s “charisma”, while the main Opposition Congress is eyeing to return to the helm by wooing its 2.5-lakh strong government employees, state’s crucial vote bank, with a promise of restoring the old pension scheme.

The Aam Aadmi Party (AAP), which is in the fray for the first time in the Assembly polls, has been missing from the state with its leaders focusing on strengthening its vote bank in another poll-bound Gujarat.

Despite AAP presence, the political scenario in the state seems so far largely bipolar — a tug-of-war between the two conventional archrivals — the Congress and the saffron party.

The Congress, however, largely banked on Priyanka Gandhi Vadra.

This time, the Congress reposed faith on its old warhorses to leave behind greenhorns to win the November 12 electoral race.

In comparison, the BJP has largely discarded its veterans and reposed faith on comparatively younger faces with the slogan ‘rivaj badlega’ (electoral traditions will change), meaning to buck the trend to sweep the polls alternatively as both arch rivals ruled the state from 1985.

Congress rebel Gangu Ram Musafir (77), who has been denied the party nomination, is contesting as an Independent from Pachhad.

The youngest candidate is Piyush Kanga (26), who is in fray from Bilaspur as an Independent.

The BJP has denied the party ticket to 11 sitting legislators, shifting seats of two ministers, denying nomination to one minister, whose son has been fielded from that constituency, and swapping seats of two veterans owing to infighting.

The grand old party, which is trying to build up its ground on the slogan “Himachal ka Sankalp, Congress hi Vikalp” (For Himachal’s resolve, the Congress is the only alternative), has retained all its 19 outgoing lawmakers.

Its two legislators — Pawan Kajal from Kangra and Lakhwinder Singh Rana from Nalagarh — in the 68-member House had joined the BJP and in the fray again from their respective seats. 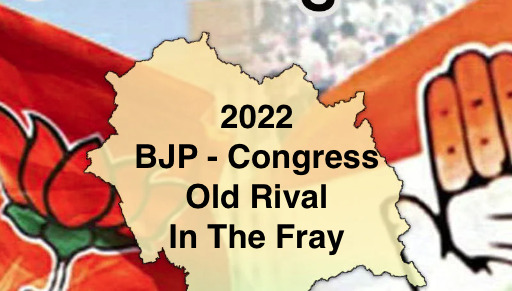 Both traditional archrivals — the Bharatiya Janata Party (BJP) and the Congress — have been contesting on all 68 Assembly constituencies, while the AAP has fielded 67 candidates.

A total of 99 Independent candidates are also in the fray.

Political observers say that the rebels are more vocal in the BJP compared to the Congress, though both parties have been gripped with infighting, besides the ruling party facing anti-incumbency.

The Congress expelled its six leaders for rebelling against the party candidates.

They included former Speaker Gangu Ram Musafir, who had lost 2012 and 2017 elections. The party opted for a BJP turncoat Dayal Pyari and ignored Musafir’s claim. He is in fray as an Independent from Pacchad in Sirmaur district.

For the BJP, it has almost dumped its two former chief ministers and stalwarts — Shanta Kumar and Prem Kumar Dhumal — citing the party’s policy of not holding any post in the government and the organisation after 75 years of age. Both are almost a miss from the party’s election strategy.

The prominent saffron faces who were denied ticket include legislator Kishori Lal from Anni and BJP state vice-president Ram Singh from Kullu. Both are contesting as an Independent from their respective seats.

In Mandi, the home district of Chief Minister Jai Ram Thakur, who is in fray from his stronghold Seraj, and Kullu district, the prominent rebels include Abhishek Thakur, son of six-time legislator Roop Singh, from Sundernagar; and Hiteshwar Singh, the son of Maheshwar Singh, from Banjar. They are in the fray as an Independent.

Upset supporters of Cabinet ministers Suresh Bhardwaj and Rakesh Pathania are questioning the high command over changing their stronghold seats at the last minute.

Unlike her husband who had a direct connection even at the grassroots, Pratibha Singh has spearheaded the poll campaign in a bid to oust the incumbent Thakur-led government.

With women voters outnumbering men in every election in the state, the BJP has come out with the ‘Stree Sankalp Patra’ that would further strengthen the objectives of women empowerment and women-led development, said Chief Minister Thakur.

Talking to IANS during his campaigning, he said, “In our outgoing five-year stint, we started many schemes for empowering the women. Now in our election manifesto, we have made 11 commitments for women-led development.”

The BJP’s manifesto promised to provide 33 per cent reservation to women in the government jobs and educational institutions, establish a corpus of Rs 500 crore to give interest-free loans to women entrepreneurs to set up homestays, besides construction of two hostels for girls pursuing higher education in all 12 districts.

An election official said the percentage of women voters exercising their franchise in the state has been on the rise since the 1993 Assembly elections.

The Congress promised to restore the old pension scheme, which will directly benefit nearly 2.5 lakh government employees, to fill one lakh jobs in the first Cabinet meeting, besides 300 units of free electricity, if the party returns to the helm.

Eyeing to woo the government employees who have been demanding the restoration of the old pension scheme, the Congress in its manifesto said all arrears of the employees would be cleared and contract employees regularised within two years.

A first-of-its kind massive anti-government protest by apple growers in the state capital in August over challenges to the Rs 5,000-crore apple industry is a case in point.

The Congress tried to woo the apple growers, who have considerable political clout in at least 20 Assembly seats mainly in the Shimla region. The growers were on the streets against the government over high input costs and the government’s failure to protect their interests.

Polling in Himachal Pradesh will take place on November 12, while the counting of ballots on December 8.