Last week I received a draft petition to the Election Commission of India from a well known writer and activist of civil society about the use of EVMs, with the request to obtain endorsements for it. I forwarded it to about twenty contacts, all well read people, engaged with and concerned about the state of our democracy under the present regime. Only four of them endorsed the memorandum, the others have maintained a strategic silence. And therein lies an unpleasant and disturbing truth- it’s time we faced up to it.

The BJP is winning this game. The official proclamation of the Hindu Rashtra may still be some years in the future, but it is taking shape on the ground and will be a fait accompli very soon. The eloquent silence of my sixteen friends is one indication- it is safer to be silent, accept the inevitable, what will be will be.

The battle for the Hindu Rashtra has to be won in the minds of the people first before it can be legitimised in Parliament or in the courts. This requires a three pronged strategy : enlist support for the cause, discourage any opposition to it, and create conditions on the ground for a majoritarian state when its time comes. And this is to be done regardless of election results; if the BJP wins the elections ( which it generally does) that is a bonus. If it doesn’t, it will still have laid a platform for the kind of India that other parties will find difficult to oppose. The BJP is going about this job with its usual careful planning and ruthless execution, while other parties are still floundering in a morass of competing egos and power point presentations.

For a Hindu Rashtra to be born it is imperative that a large section of the 80% of the population be convinced that minorities, especially the Muslims, are the anti-national ” Other” and need to be shown their place. This is being done through a blend of legislative measures and lumpen elements. Triple Talaq, Hijab and beef bans, CAA and NRC, UCC belong to the first group. To the second belong the shobha yatras, provocative sloganeering outside mosques, bulldozers, dharm sansads and the in-your-face Hanuman Chalisaa. The violent reactions to this relentless persecution, provocation and sloganeering are exactly what the BJP wants for they further demonise the other community in the minds of the Hindus and reaffirm the necessity for a nation for the Hindus. The idea is to generate a fear (if not hate) psychosis, which is fertile ground for planting the seeds of division, and so far at least the BJP has been successful at this. With each Jehangirpuri, Khargone or Jodhpur the impending harvest looks more promising. 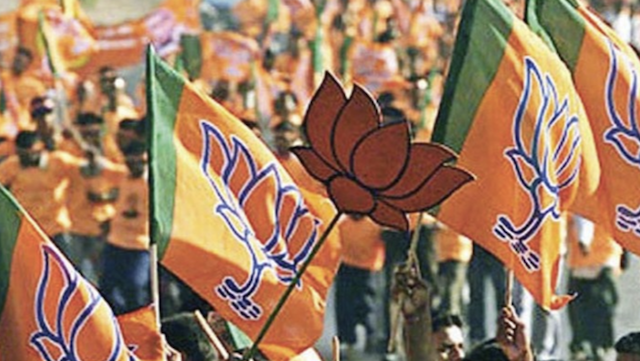 The BJP appears to have been quite successful in enlisting support for its perverted weltanschauung. Bearing testimony to this are the daily hate messages on one’s Whatapp, the nature and tenor of media reporting, groups of retired govt. officials ( like the Concerned Citizens Group) quick to take on any other group which has the temerity to be critical of the regime, members of Big Capital who benefit from the fact that cronyism is the obverse side of communalism, the daily defections from other parties to the BJP, the stupendous contributions to the Electoral bonds, the victory in all eight seats in Lakhimpur Kheri. Most approve of the BJP’s communal and majoritarian vision of the country, the others are either silent or tagging along for the ride on the gravy train. Either way, the support is growing.

Any opposition to this grand plan is ruthlessly crushed, by the state police in BJP ruled states and by central agencies in others. A Jignesh Mavani will be arrested and hauled 2500 miles to another state, an Aakar Patel or Rana Ayub will be prevented from going abroad, inconvenient TV stations and Youtube channels will be shut down, NGOs will be deregistered, teachers will be sacked for teaching the “wrong” lesson, houses and shops will be bulldozed if you resist the march to the promised land. It is not without reason that our Prime Minister has not entertained a single press conference in his own country in eight years, or that he refuses to take questions at press conferences abroad. It is also not without reason that the latest Press Freedom Index shows that India has further slipped eight places to 150th rank out of 180 countries. But all this is small change for big bucks.

For the inescapable truth is that the country is steadily moving in the direction the BJP and RSS want it to, a fatigue is setting in among the minorities and the remaining with liberal values; even the Opposition is casting itself in the new mould. A Nitish Kumar has betrayed every principle he grew up with, so long as he can remain Chief Minister (and maybe become President, if his current posturing is any thing to go by). A Naveen Patnaik will continue to prevaricate, refuse to take a stand and support the government in Parliament. As will a YSR or a KCR, so long as they can continue in power in their own states, ignoring the erosion of federalism, the imposition of Hindi and the misuse of central agencies, all of which are steadily cutting away the ground under their feet.

Arvind Kejriwal is perhaps the most unethical, duplicitous and opportunistic of the lot: while giving anti- Modi bytes in public, he has abandoned the minorities, has refused to be counted on Shaheen Bagh, the farmers’ protests, the NE Delhi riots and Jehangirpuri. In fact, on this last incident, he has out Heroded even the BJP- blaming it all on the Rohingyas and Bangladeshis, which is precisely the right wing narrative. He will soon discover, to the country’s cost, that one can’t run with the hare and hunt with the hounds for ever. By not working with the other opposition parties and insisting on ploughing a lonely furrow to the holy grail of the Prime Minister’s chair, he will have ceded even more ground to the BJP in the not-so-long run.

What is perhaps most egregious and alarming is the haste with which other states and parties are adopting the BJP’s tool-kit: vigilante violence in West Bengal, imposition of untenable sedition charges against the Rana couple in Maharashtra, the use of Punjab police by Kejriwal to hound Kumar Vishwas and Alka Lamba in Delhi, the use of bulldozers in Alwar in Rajasthan. These are the precise forms of misgovernance the Opposition is supposed to be fighting against! By emulating them these states and Chief Ministers are providing legitimacy to the BJP’s narrative.

The administrative ground for the coming Hindu rashtra is more or less ready. All institutions, including the so-called constitutional ones, have become compliant and willing partners. The syllabi of educational bodies are being redrafted to exclude Faiz, Mughal history, federalism, secularism, social and economic inequalities, and all subjects which should concern any democratic dispensation. All-India Service rules are being manipulated on a regular basis to suit the purposes of the ruling party at the center, the latest being the reinduction of Shah Faesal into the IAS, three years after he resigned, even though the rules do not permit this. He is perhaps needed for the next gambit in Kashmir. All central enforcement agencies are now we-don’t-give -a-damn partisan. It took an Assam Sessions judge to recently warn us that we are becoming a police state. (The observation was predictably stayed by the Assam High Court). Even the Army appears to be falling in line, as evidenced by the haste with which an Iftaar tweet by the Army’s PRO in Jammu was deleted. All these may look like straws in the wind, but it’s the Devil’s Wind we are talking of here.

The judiciary, frankly, is a mixed bag or a pig in a poke at best. It has given us some memorable judgments, like the Delhi High court on giving bail to Natasha Narwal and Devangana Kalita under UAPA, or the one on Pegasus, or the order which stayed the banning of Media One channel on “security” considerations. But that UAPA judgment has not been followed up for others similarly accused, including the Elgar Parishad detainees; challenges to fundamental anti-democratic laws on Electoral Bonds, reorganisation of Kashmir, Article 370, sedition, powers of the Delhi govt. etc. are still not being heard or decided. Hundred of habeas corpus petitions are not being heard. Bulldozers continue to run riot. No accountability is being fixed or reparations being ordered for proven victims of state brutality and injustice. Instead, as a recent Delhi High Court order in the Umar Khalid case indicates, the judiciary appears to be more concerned about ring-fencing the Prime Minister from any criticism, and frowning on the use of words like “jumla”, “krantikari” and “inquilab” which are part of our daily lexicon. Will the courts now decide the vocabulary for free speech ? It’s difficult to assess where the judiciary is headed, but the portents are not encouraging, especially when push will come to shove, as it inevitably will.

The country is being readied to welcome the Hindu Rashtra. The BJP will continue to win elections, and even where it doesn’t, it keeps increasing its vote share, as in Bengal. The southern states may baulk at this but they shall soon be brought in line by the liberal use of Delimitation Commissions, Finance Commissions, a reoriented IAS and IPS, Pegasus Two (whatever happened to the report of the SC appointed committee?), smart use of the crores in the Electoral bonds. The goons on the streets will do the rest of the persuading.

I hope my sixteen silent friends realise how close the flames are to their houses, and that silence does not provide any immunity or safe passage. As the poet Sheikh Ibrahim Zauq asks us :