Speaking on the occasion he said, “We Tibetans have a rich religious and cultural tradition. While we were in Tibet, we were not aware of how it compared with other traditions, but once we came into exile we became aware of how precious our heritage is. It’s a practical tradition at the core of which is methods for tackling negative emotions and cultivating peace of mind. In my own daily practice I focus on the awakening mind of bodhichitta and cultivating an understanding of emptiness, which together bring me deep inner peace.

He added, “Chinese communist hard-liners criticize Tibetan culture without really understanding what it’s about. We may be unable to send these 223 volumes of the Monlam Grand Tibetan Dictionary to China at present, but in Taiwan there will be people who can appreciate what kind of culture we have preserved. 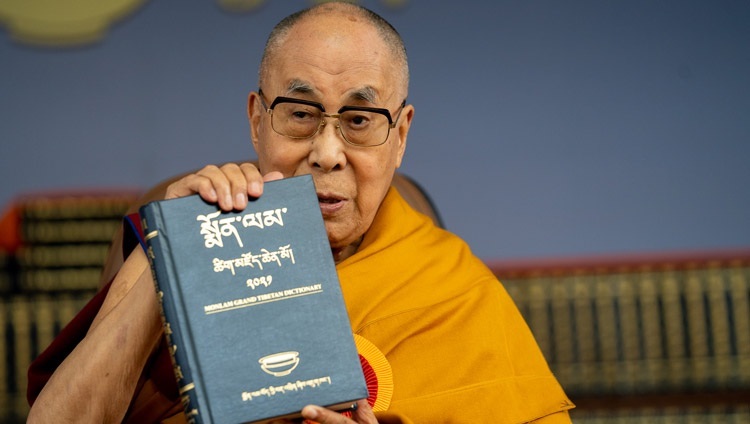 “We are not seeking total independence from China, but we need to be able to keep our religion and culture alive. We shall be more than willing to share this knowledge with our Chinese brothers and sisters in the hope that doing so will promote peace between us.

“Our culture originated in India, and today we have all sorts of means to make it better known. I think there would be great benefit in combining aspects of ancient Indian knowledge with modern science. I’m looking forward to discussing how this might be done with educationists and others in Delhi. The most important element is understanding the workings of the mind and emotions, which leads to peace of mind and in the longer run to peace in the world.

“Chinese hardliners misapprehend the value of our religion and culture. Publication of this dictionary, which is already being translated into Chinese, can go some way to educating them.”

“In exile we requested the Government of India’s help in setting up Tibetan schools where our children could study in their own language. Preserving the Tibetan language has played a key role in our ability to keep our religion and culture alive. I’d like to remind all our friends and Dharma friends gathered here that what is precious about our heritage is that it helps us achieve and maintain peace of mind.”

The curator of the Monlam Grand Tibetan Dictionary project, Lobsang Monlam mentioned that the 223 volume dictionary has been compiled, with the support of the Dalai Lama Trust, by more than 200 people working together for nine years. The dictionary is not only available in book form, but has given rise to 37 apps and a fully-fledged website which is updated from time to time.

Monlam declared with pride that, with more than 200,000 entries, this is one of the largest dictionaries in any language in the world. It reveals the vast depth of Tibetan culture. Bringing it to completion is a historic achievement that will make a substantial contribution to preserving Tibetan cultural traditions