International days are occasions to educate the public on issues of concern, to mobilize political will and resources to address global problems and to celebrate and reinforce the achievements of humanity. The existence of international days predates the establishment of the United Nations, but the UN has embraced them as a powerful advocacy tool too.

Mountains are home to 15% of the world´s population and host about half of the world’s biodiversity hotspots, providing lifesaving freshwater for everyday life to almost half of humanity. Therefore, their conservation is a key factor for sustainable development and is part of Goal 15 of the SDGs. Unfortunately, mountains are under threat from climate change, extensive developmental works, rising anthropogenic pressures and overexploitation of its natural resources. As the global climate continues to warm, mountain communities living with little land available for agriculture on its steep slopes, face even greater struggles to survive. The rising temperatures also mean that mountain glaciers are melting at unprecedented rates, affecting freshwater supplies downstream for millions of people along with the threat of flash floods and landslides. The increasing attention to the importance of mountains led the United Nations General Assembly to designate 11th December as “International Mountain Day” in 2002, the first International Mountain Day being celebrated during 2003. Since, then it has been observed every year to create awareness about the importance of mountains to life, to highlight the opportunities and constraints in mountain development and to build alliances that will bring positive change to mountain peoples and environments across the world.

The theme of this year focused on sustainable mountain tourism. Mountain tourism attracts around 15 to 20 percent of global tourism. It has been understood that sustainable tourism in mountains can contribute to creating additional and alternative livelihood options and promoting poverty alleviation, as well as landscape and biodiversity conservation. It is a way to preserve the natural, cultural and spiritual heritage, promote local crafts and high-value products, and celebrate many traditional practices such as local festivals.

Himalayan Forest Research Institute (HFRI), Shimla celebrated the International Mountain Day at the Western Himalayan Temperate Arboretum (WHTA), Potter’s Hill Shimla. Participation was over 100 which included BSc students with faculty from St. Bede’s College, MSc students from the Himachal Pradesh University, Scientists and staff from HFRI, JAICA Office, Summer Hill and representative from eco-tourism units. The program was presided by the Director, HFRI Dr. S.S. Samant who while speaking on the occasion, stated that the Himalayan mountains are the reservoir of rich biodiversity and are deeply embedded into the lives of the local communities. He also cautioned that due to the increased anthropogenic activities in the form of rapid development is posing a serious threat to the mountains, resulting in biodiversity loss.

Dr. Jagdish Singh, Head Extension, HFRI welcomed all the participants and apprised about the theme of sustainable mountain tourism. The importance of the theme in this programme is to discuss and create awareness among all stakeholders, he said. In context to mountain tourism, he said that due to the Covid-19 epidemic, the eco-tourism being practiced in the hills has been greatly impacted and many people had lost their livelihoods.

As Scientist In charge for the establishment of the arboretum, I (Vaneet Jishtu) highlighted the journey taken in its development. I informed that this arboretum is being set up with the financial support from the office of the Wildlife Wing of the Himachal Pradesh Forest Department. The idea is to conserve native arboreal flora and as such will also benefit and promote tourism along with education and research on native plant diversity. 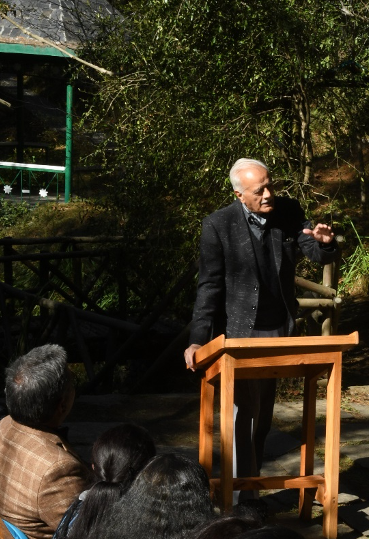 The keynote address was delivered by Sh. Shrinivas Joshi, a retired civil servant and renowned personality of Shimla. Mr Joshi delivered his thoughts on the mountains in an interesting poetic manner, wherein he provided an imaginary canvas for the spell-bound audience. His lecture was an amalgamation of poetic, humor and knowledge about the “Mountains and the Mountain Based Tourism”. In his prose, he one by one took to describing the famous mountains of Himachal, starting with Chanshal, Hatu, Shikari Devi, Shali and ending with the majestic Dhauladhars. He informed about the history and myths in context to each mountain and the temples found on them. He truly left a lasting impression on the audience, many among them stating that they never before have listened to such a session, especially in the environs of pristine nature. His talk reflected on how humans and the mountains are interdependent – he literally took the audience on a virtual tour across the landscape of Himachal.

Dr. Shramja Munjal, Faculty from St. Bede’s College in her brief address said that the visit to the arboretum has always been a pleasure as well as a great learning experience, not only for the students but also for the teachers accompanying. She said that sustainable tourism in the mountains would contribute to creating additional and alternative livelihood options.

The Additional PCCF Wildlife, Sh. Anil Thakur educated the students about the wildlife in the mountains. He reiterated that the value of wildlife has been widely ignored or under-rated in the present by the local community. He cited the recent incidence of the leopard kill in Shimla town. He advised that one needs to be vigilant and careful, following certain precautions, especially in the vicinity of forests to avoid man-animal conflicts. 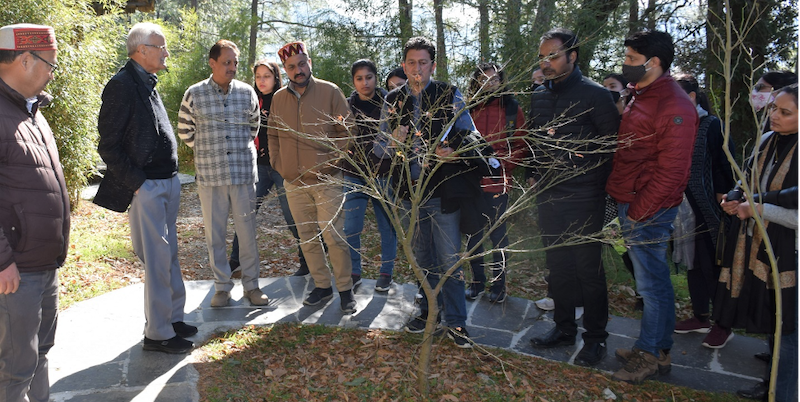 Open discussions, songs, poetry and experience sharing by the young participants made the celebration more interactive and livelier. The overall motive of celebrating this day was to spread awareness regarding the preservation and protection of our mountain ecosystem. Later, the participants were taken along the various trails of the arboretum to experience the aesthetics and learn about the trees and bushes planted in a thematic manner.