In his best-selling book, TEN LESSONS FOR A POST-PANDEMIC WORLD, Farid Zakaria makes an interesting point. He says that since the early 1990s, global inequality had been showing a marked decline, both between countries and between people in a particular country. This, he says, ” was caused in large part by sustained economic progress in China, India and other developing countries, which grew much faster than developed countries…..narrowing the gap and lifting hundreds of millions of people out of poverty.” Globally, the number of people in extreme poverty dropped from 1.90 billion in 1990 to 650 million in 2018.

He regrets, however, that with Covid-19, ” much of this progress could be reversed.” We can see this regression playing out in India: with the contraction of the economy, massive job losses and ruinous medical expenditures, it has been estimated that as many as 220 million people in India have dropped below the poverty line in the last 18 months, adding to the almost 200 million already there. This has wiped out the gains of the last two decades in combating inequality.

But there have been huge gainers during ( and because of ) the pandemic: high tech firms, e-commerce entities, pharmaceutical and serum production companies, pathology labs, hospitals and nursing homes. In India this gain has come with the added and familiar flavour of cronyism. The latest Bloomberg Billionaire Index revealed that MS Ambani, Adani and four other Indian billionaires added the US $ 44.75 billion to their wealth in the first half of 2021 when the vast majority of the population was simply struggling to survive. The Sensex, which adequately represents that 1% of our population which owns 54% of all wealth in the country, rose more than 11000 points during the pandemic! ( From 41,385 on 1.1.2020 to 52,445 on 1.7.2021). There is more good news: according to the Swiss National Bank, deposits by Indians in Swiss banks, which were Rs. 6625 crores in 2019, went UP to Rs. 20,700 crores during the pandemic! It was business as usual for Big Capital and should have been good news- except for a couple of factors. 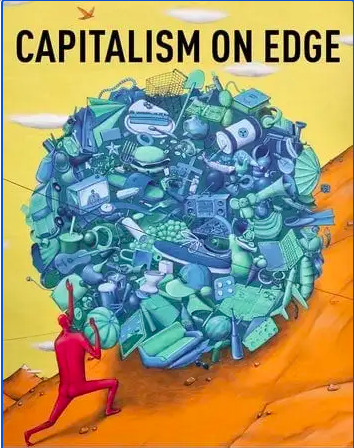 This grotesque inequity- obscene islands of prosperity in a sea of penury and misery- represents what Noam Chomsky, the American philosopher, terms the face of “savage neo-liberalism.” He goes on to state that the script of this ” has been dictated to governments by their corporate masters” and that “authoritarian states are quite compatible with neoliberalism.” This fits in squarely with the economic policies adopted by the NDA government, both before and during the pandemic.

The government, by the admission of its own Finance Minister, is in dire straits. It has told the Supreme Court it has no money to compensate for Covid deaths or to implement the Swaminathan formula for payment of MSP to farmers, it has no money to pay its employees the arrears of the three DA instalments it had frozen last year, it has no money to disburse cash relief to those rendered unemployed by the pandemic, it can extend only credit guarantees and not subsidies to millions of suffering MSMEs and small traders. And she is not wrong: GST has failed to live up to its promises, the guaranteed GST compensation to states is in huge arrears, and central tax revenues as a percentage of GDP has declined from 10.1% in 2013-14 to 9.9% in 2020-21.

In such circumstances, what would any sane economist expect a government to do to make up for these losses? TAX THE PROFITS OF CORPORATES AND THE WINDFALL WEALTH OF OUR BILLIONAIRES AND MILLIONAIRES. Right? Wrong. Our government is doing just the reverse.

Under the garb of ” Ease of doing business”, which is a fig leaf for rank cronyism, the government is introducing policies which blatantly enrich corporates, while the fiscal burden is passed on to the common man. In 2019 it reduced corporate taxes, losing annual revenues of Rs. 200,000 crores. This was an inexplicable decision because, as Aunindyo Chakrabarty points out in an article in THE TRIBUNE, in the last ten years the share of Corporate tax in the total tax receipts has gone down from 36% to 23%, while that of indirect taxes has gone up from 45% to 53%. As any economist, even one educated in Nagpur, will tell you- the higher the contribution of indirect taxes to an economy, the more inequitable it is. ( The “justification” was that the companies would invest these savings in increasing production. This, as expected, never happened: the money was used to clear balance sheets or squirrelled away in some foreign tax haven).

Thereafter, the pandemic provided the perfect opportunity to further enrich the corporates. Interest rates were kept deliberately low to help industry and divert savings to stock markets, whereas the middle classes were forced to witness a sharp drop in their Fixed Deposit rates. Capital gains taxes from shares were also kept low, benefitting the big investors and the handful of companies which control the bourses. Labour laws were quietly amended in order to reduce their security of service and bring them in line. EIA (Environmental Impact Assessment) Rules were amended to make it easier to set up industry at the cost of the environment, without even an EIA approval! Farm laws to corporatise agriculture were promulgated in the middle of the second wave of Covid, hoping this insidious move would go unnoticed. Disinvestment proposals are being floated on a large scale ( Rs. 200,000 crore estimated receipts in this fiscal) knowing fully well that we are in a recession, quotes will be depressed, and there are only a few buyers in the market. The predictable result will be that the same favoured cabal of corporates will corner these public assets at throwaway prices. The writing off of corporate NPAs has become an industry in itself: Rs. 2.54 lakh crores were written off in 2018-19 and another Rs. 1.53 lakh crores in 2020-21. This is the public’s savings subsidising private profits.

This is the time, as I said, to tax these corporates and billionaires who are milking this man-made calamity for all it is worth and to use these funds to provide succour to the vulnerable sections of society. Most countries are following this precept. In the USA, Joe Biden is funding his revival package by a $ 3.60 trillion tax hike on corporates and High Net Worth Individuals. Top Income Tax rate has been increased from 37% to 39.6%, Capital Gains tax on persons earning in excess of $ 1 million per annum has been increased from 20% to 39 %; taxes have also been hiked on income from sale of investments and transfer of assets on death; Corporate Income Tax has been increased from 21% to 28%; tax breaks will no longer will be available for polluting industries. The G-7 group of the world’s richest countries at its recent conflab has also resolved to maintain a minimum level of Corporate tax. The UK has announced measures similar to that of the USA. But our government is doing nothing in this direction and continues to tax the common man instead.

The economic path being followed by Mr. Modi and his onion eschewing Finance Minister is absolutely incomprehensible. If they are devoid of any ideas of their own they can certainly pick up a few from other, better-governed countries. The last thing we need after the pandemic is a double dose of post-Covid capitalism.