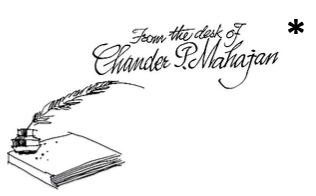 The coffee tastes as good as it did five decades ago when I had the first sip at the treat by the fellows & friends.

After joining as an Electrical Engineer with the government of Himachal Pradesh in July 1966; at one time it became a ritual to visit the Coffee House in the morning and in the evening to and fro my office. Unfortunately, the heat of the COVID-19 has slid the ‘Houseful’ status of Shimla’s heritage Indian Coffee House on Mall Road, to the table available’; & further ‘to takeaway and delivery services. The establishment is virtually pulled down to the verge of closure.

Said to be running on a no-profit- no-loss basis, the outlet has sunk into the heaps of liabilities. Hats off to the loyal employees who still carry on with the utmost dedication, in a bleak hope to get their dues.

The Indian Coffee House in Dharamsala (Kangra) that I enjoyed visiting was another popular hang-out in the city till the Indian Coffee Workers’ Co-operative Society closed it down in 2006 owing to heavy losses.

There were nearly 50 Coffee Houses all over British India. Indians were perhaps not allowed into these coffee houses, which were mainly Europeans-only establishments.

Coffee production consumes a large volume of water. On average it takes about 140 liters of water to grow the coffee beans needed to produce one cup of coffee. Climate change may significantly impact coffee yields during the 21st century.  The coffee industry’s negative impact on the environment and the clearing of land for coffee-growing and water use cannot be overlooked.

A lingering flavour of caffeine keeps going into my nostrils. I wonder if I am a coffee addict.

According to ‘Neuroscience News.com’ high caffeine consumption may increase the risk of Blinding Eye Disease.