I’ve never believed in the adage that learning is a continuous process. According to cognitive experts a human being learns 80% of everything he will ever learn by the age of five years. (In my case it took a couple of more years because I have always been a bit slow on the uptake, or, as my wife who always looks at the more positive side of things, says, up on the slow take.) The remaining 20% is useless drivel, the kind of balderdash you pick up on Republic TV and Times Now, which tends to negate Darwin’s evolutionary process. And I have exemplary role models to prove my thesis that successful people stopped learning anything the moment they changed their diapers for a “katcha”.

Take our own resident sage, the Prime Minister, who never learns from experience and keeps inflicting on us one surgical strike after another without the benefit of any anesthesia: demonetisation followed by the Lockdown, Article 370, NRC, CAA and now the Farmer’s Bills. Or take his colleague the Railway Minister who has yet to learn that a foot is meant for walking and not for inserting in one’s mouth: his epiphany that Einstein discovered gravity was swiftly followed by his declaration that high unemployment indicates growth in self employment. Barely had we recovered from this stupendiotic  (my word, not Mr. Shashi Tharoor’s !) assertion than he informed Mr. Bezos that he could keep his billions because India (which is looking at a 15%  drop in GDP this year) didn’t need his shekels. And now a certain glamour and dash has been added to my theory by none other than the redoubtable Ms Kangana Ranaut, who has not learnt when to let a good thing be. Having equated Mumbai with POK, you would think she had made her point. You would be mistaken, because she then decided to widen her canvas, as it were, and proceeded to call another actress a “soft porn star”; to maintain a gender balance she then categorised all agitating farmers as terrorists. It appears that she has convinced herself that what India needs today is another Rani ki Jhansi, and that what she herself needs is a Rajya Sabha BJP ticket from Manali. I am informed her film MANIKARNICA is now being retitled as MANALIKARNICA, much to the discomfiture of the sitting BJP MLA from Manali.

But I am not one to stand on prestige, and therefor must confess that I was wrong – one can still learn something new, even at the age of 70, in our New Bharat. For in recent months I have been made aware of yawning gaps in my erudition, wide as the Depsang plains, through which you could drive a Ram Rath, if not a Chinese armoured brigade. Some of these are worth sharing with the reader, especially those whose cognitive growth also hit a road block at the age of five.

I have discovered, for instance, that whereas to build is human, to demolish is divine. The urge to demolish is what drives our current civilisation. It began, I suspect, with the demolition of the Babri Masjid in 1992 as an apt expression of our glorious culture, but has since then become the mainstay of good governance. We now demolish what we cannot resolve and hide our failures beneath mounds of rubble. Dozens of apartments in Ernakulam were ordered to be razed to the ground in 2019 by the eminently forgettable Justice Arun Mishra, who spent his spare time singing elegies to the Prime Minister and his bench time distributing relief to corporates. These poor middle class apartment owners were thrown on the streets overnight. Even though the buildings had every conceivable required approval, this law abiding judge found them in violation of environmental regulations. Perhaps they were, just like every second building in Shimla . So punish the guys who gave the permissions and the builder who was less than honest with his buyers. But why take on Big Government and Big Money, right? The height of these buildings, presumably, also obscured from the good judge’s view the rape of the environment by the govt’s own coal, hydro and highway projects in Chattisgarh, Arunachal and Uttarakhand, and so they escaped his attentions. Selective demolition is the name of this game. 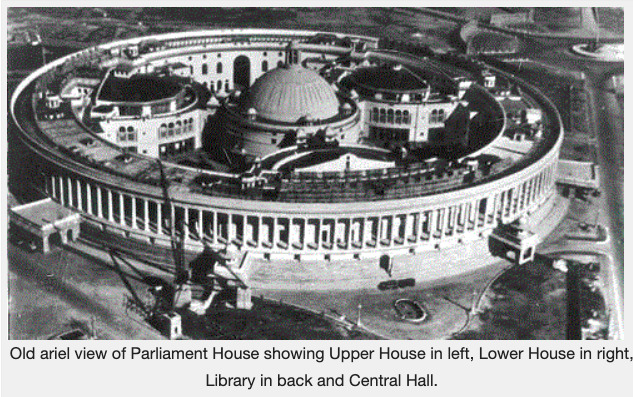 But he established the principle that demolition, not development, lies at the heart of good governance. And so the Supreme Court proceeded last month to order the demolition of all “jhuggis” and jhopris” on Delhi’s railway tracks, no doubt in furtherance of the promise of Sabka Saath Sabka Vinash. There was no concern felt for the 50,000 who would be rendered homeless as a result, just as in slightly earlier times the same court ignored the tens of millions of migrants trudging back to their villages among a hail of police lathis and sprays of disinfectants. Mr. Kejriwal, smelling electoral blood, immediately announced that all the displaced would be rehabilitated. But no one took him seriously since he still has to rehabilitate Prashant Bhushan and Yogendra Yadav.

No one, however, can stop a bad idea whose time has come. The Uttar Pradesh govt., the pioneer of the Encounter school of justice, decided that convicting people it didn’t approve of took up too much of its time and was anyway beyond the competence of its police. It was much more convenient to just demolish their houses. There was, of course, that little irritant of finding the law that permitted such a progressive initiative, but, as the Fuehrer famously said: I AM the law. And so the IPC has been replaced by the JCB, a much more efficient instrument for bringing about change, as the many accused of opposing the government are now finding out. It’s amazing what a mere change of a few alphabets can do for good governance.

The JCB is a politically neutral and gender neutral machine, as the BMC (Bombay Municipal Corporation) soon realised. Confronted with our own home-made climate change disaster, Hurricane Kangana and her 200 km gusts of fulminations, the BMC decided to demolish her Pali Hill house: it literally left no stone unturned to convey its message to her. Kangana, who is the apple (what else?) of Himachal’s eye, was immediately designated as “Himachal ki beti” by the Himachal Chief Minister, and his BJP cadres have now expressed their intention to demolish, as a return favour, Priyanka Gandhi’s house near Mashobra. Which has now got me seriously worried. My own house is quite close to Priyanka’s and I once wrote an article praising her brother: that can put me on the death watch wait list if the demolition virus replaces the corona virus in Mashobra.

And so it was inevitable that, having demolished just about everything that made this country great, the govt. would sooner or later turn its baleful eye on Parliament. The Central Vista project is the apotheosis of this new spirit of reconstruction, by which an entire era of history and heritage will be demolished. The existing Parliament building – one of the most iconic and recognizable edifices in the world – will be put in mothballs, under a sarkari coat of pan masala. A new Parliament building will replace it. To me, this is just an ex post facto acceptance of reality. The present Parliament building is now only a hollow shell, it is no longer the sanctum of Nehru, Patel, Rajendra Prasad, Ambedkar, Minoo Masani, Lal Bahadur Shastri, Vajpayee and other stalwarts who made us proud, it is now the abode of pygmies. The values, traditions, wisdom, courtesy, resounding oratory and genuine Indianism which once imbued each stone and cranny of this building have long departed along with these great personalities and true sons of India. When the life blood and very soul of the structure has been drained away, of what use is the building itself? In fact, it is only appropriate that the mediocrity of today’s politics be taken to another, new architectural mediocrity instead of tainting the grand old building. It deserves better than the execrable scenes that play out inside it everyday. Sometimes demolition can be a blessing, it can preserve the truth for all times and remind us, as nothing else can, of what we have lost. Every mound of rubble has a story to tell, and it’s not pretty.