Omar Khayyam ( no relation of Omar Abdullah) must be feeling vindicated today. Remember his paean to the grape?

” And this I know: whether the one True Light
Kindle to Love or Wrath, consume me quite,
One Glimpse of it within the Tavern caught
Better than in the Temple lost outright.”

That light has now dawned in India( though not in the dark, convoluted caverns of Mr. Nitish Kumar’s brain) and this is our national epiphany: Alcohol is King! It is not vaccines or lock downs or plasma that will save modern civilisation (if I can call it that, for want of a better word) but the daughter of the grape or (for those who didn’t go to St Stephens) the simple booze, hooch or tipple. The evidence is accumulating faster than Mr. Modi’s promises and is far more reliable. Consider.

Alcohol is now the mainstay of both our health and economic planning. Sanitisers( 60% alcohol) are our first line of defence against the virus, and liquor the Maginot line that protects our economy from collapse. Not the more glamorous Income Tax, GST, Corporate Tax, Dividend Tax but the humble Excise Duty. Ever since the plebeian, stagger- alone “theka” was allowed to open Finance Secretaries have been spotted in Banks depositing money instead of robbing them. All except the Finance Secretaries of Gujarat and Bihar, that is, whose dry begging bowls do not overfloweth. Economists and die hard prohibitionists could not have failed to notice that Mr. Modi was able to announce his Rupees twenty lakh crore package only AFTER the liquor vends opened: when the animal spirits were down it is the distilled spirits that saved the day for us.

This is the golden age of the Drunkard, the latest of the COVID warriors. And just in time for a new breed of warriors, if you ask me, considering that the older lot are busy showering flowers from helicopters and serenading nurses and doctors. Maybe the PM will ask the Air force to sprinkle some grape juice on these sturdy tipplers the next time around. For these coronnials are the face of the new India: when they guzzle free booze they have the power to change governments, when they pay for it they change the economy! They also serve who only stand and wait -for their bottle.

I hope you have noticed the delicious irony, implicit in the words of Omar Khayyan above: in this avowedly religious country all temples, mosques and churches are closed, but the liquor vends, the Taverns as it were, are open ! Could there be a greater force for secularism than alcohol? The thekas have no restrictions for their avid customers based on grounds of gender, menopausal status, religion, dress code or income: in the house of Bacchus all are welcome. Can there be a greater charter for human rights and equality? No sir, the gods have finally found their rightful abode; as has our Constitution, and just in time too, for its original residence- Parliament- has made it clear that it is no longer welcome there and must find an alternative demesene. These nation building qualities of alcohol have received the ultimate endorsement- by the Supreme Court, which has suggested home delivery of liquor. It’s a different matter that millions are still waiting for home delivery of food, but we should not quibble. This is at least a lurch, if not a step, in the right direction. Who knows what stupendous surprises the court may come up with next- home delivery of justice? 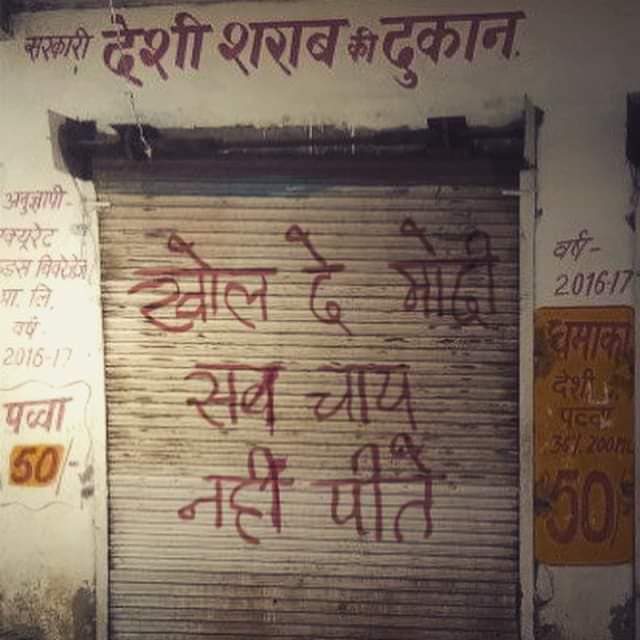 The very term ” anti-national” has been redefined, providing much needed relief to the libtards, intellectuals, leftists and dissenters- the new, post Covid anti national is the teetotaler, the wet blanket who refuses to take the daughter of the grape to bed with him. By not having those three pegs every evening he is causing irreparable damage to our economy. In a country where lining up in mile long queues is the true demonstration of patriotism- in front of banks, ration shops, Aadhar centers, ATMs, food camps, railway stations – the failure to line up before the thekas is a seditious act. I am surprised Mr. Arnab Goswami has not yet raised this subject in a panel discussion, but I can give him the benefit of doubt: perhaps he himself is in line outside an “English Wine Store” or an Indian police station. In both cases, however, I expect he will maintain his usual anti-social distancing. It may not work for him but it keeps others safe.

And here’s the clincher: alcohol has ensured that the essence of democracy- dissent, freedom of speech, the right to oppose – is alive and kicking in Bharat, notwithstanding our Doubting Thomases. Just look at how the decision to reopen the thekas has been received in various states. In Delhi it was allowed by AAP but opposed by BJP; in UP allowed by BJP and condemned by SP; in Punjab the Congress permitted it but AAP was not happy; in Maharashtra the Shiv Sena approved it but the BJP criticised it; in Tamil Nadu the AIDMK gave it a green signal but the DMK raised the red flag; in Karnataka the BJP said “hic!” but the Congress said”Huh!” What a glorious moment for democracy, firmly establishing the two building blocks of our enlightened politics: ideology is a waste of time, and in a tavern there are no permanent friends and foes, all are drinking buddies.

But now, dear reader, I must bid adieu. All this waxing eloquent about the golden hippocrene has given me a raging thirst and roused my dormant nationalistic spirits- it is now time for a dose of the other spirits. I must bestir myself to the nearest vend to support my country. There’s nothing like a martini (known as a quarantini in these lock down times) to accompany a reading of the Rubaiyat. My wife prefers that other potion for these contagious times, comprising of vodka, orange juice and a dash of sanitiser- it’s called Typhoid Mary. It keeps both the bacillus and the husband at a respectable distance.