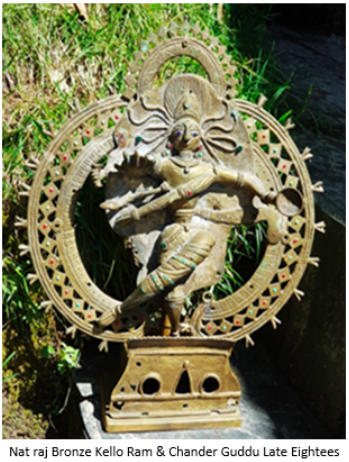 Cire perdue , method of casting images in metal has had a long history of tradition and growth. The earliest examples of this method have been unearthed in the excavations at Mohenjodaro. The oldest known example of this technique is a 6,000-year old amulet from Indus valley civilization.

Now a days industrial technology has produced the micro-crystalline wax which have been found to be more suitable for cire perdue casting. Micro-crystalline wax, a by-product of petroleum is marketed in forty different grades and can be used without the use of additives except for a colouring medium. Being an industrial by-product it is cheaper than beeswax.

I read in India Today of May, 2007 that the modeling clay from Mlelgaon, Jodhpur was the best.

With inputs from: Cire Perdue CASTING IN INDIA  by M V KRISHNAN

*It is sad that Sh. Khello Ram passed away in 2016 and his wife also died two years after him as I came to know from their son Rajesh who lives in (Vill. Suted) Dharamshala.