Dharamshala: Chief Minister Virbhadra Singh said , “Himachal government has decided to take over the ancestral house of Pahari Gandhi Baba Kanshi Ram (11 July 1882 – 15 October 1943) in village Padhyaal near Dadasiba in Dehra Sub-division of district Kangra and convert it into a heritage monument.”

In a press communique the CM said that Baba Kanshi Ram, was a great admirer of Mahatma Gandhi and an activist for independence born in village Padhyaal near Dadasiba in Dehra Sub-division of district Kangra. 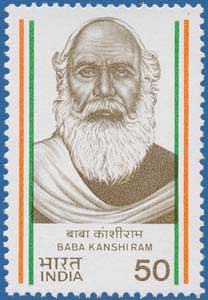 The chief minister said, “ Pahadi Gandhi was involved in spreading Mahatma Gandhi’s message through his poetry and songs in the Pahari languages after Jallianwala Bagh massacre which had deep impact upon him. He vowed to wear black clothes till India gets independence.”

At the age of seven, Baba Kanshi Ram, married Sarasvati Devi who, at that time, was just five years old. He continued his studies in the local village. Soon, he lost both of his parents, and at the age of thirteen, relocated to Lahore in search of work, where he first met many revolutionary activists, including Lala Lajpat Rai, Lala Hardayal, Sardar Ajit Singh and Maulavi Barkatullah. The title Pahari Gandhi was given to him by Pandit Jawaharlal Nehru at a rally in Hoshiarpur in 1937.

As Baba Kanshi Ram used his poetry to protest against the British Raj, he was arrested as many as 11 times for spreading patriotic messages through Pahari poems and verses and almost spent nine years of his life in different jails.

In the year 1984, former Prime Minister Smt. Indira Gandhi also released a postal stamp in name of Baba Kanshi Ram. On his 135th Birth anniversary falling on 11th July, the state government has decided to take over his house, preserve it and also to erect a memorial in his memory, stated the Chief Minister.