Opening of a Book Cafe in the Taka Bench park just above historic Ridge of Shimla may not make a news.

The unique cafe, built by the Shimla Municipal Corporation and Himachal Tourism Development Corporation under Shimla beautification plan, that offers a serene reading place with splendid titles and educational books stacked in a beautiful ambience enjoyed by locals and tourists alike with steaming hot coffee and snacks and drinks may also not make a news.

But the fact that the Book Cafe opened just a few days ago that is on 11th April 2017 is being run by two jail inmates convicted for life under section 302 of the Indian Penal Court, certainly makes an interesting news.

The fact that the eatables being offered for sale in the cafe are baked in the Sub Jail of Shimla at Kaithu by a group of ten convicts, adds value to the news. An applaudable case of reforming culprits ofcourse.

The natural instinct of nose for news drove me to the Book Cafe located a few meters above the State Library building and the historic church, on way to the popular Jakhu temple. The itch was to gather some interesting facts on the story more than enjoying a cup of hot coffee.

Overlooking a breathtaking locale beautified with stone flooring and granite benches, the beautiful single story structure of Himachali architecture drew me in. A chargeable place @ one Taka per entry (the smallest denominations of Indian coins)some decades ago, the park is now free for visitors. 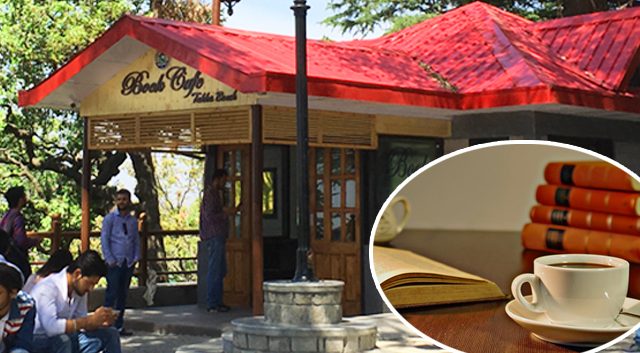 A look around the serene surrounding showed a family enjoying cold drinks and pizza with two youngsters while looking through the glass window at beautiful landscape into the distance. A lonely foreigner I found was lost in a book on Himachal temples. The book shelf adorned a number of titles donated by people from their collection, as i later learnt. An avowed book reader may come across rare titles too to gobble with snacks for hours together.

A smiling middle aged person behind the counter drew my attention as I approached the place for gathering information.

Was that truly a unique case of Jail reforms being practiced by the government of Himachal Pradesh, I wanted to ensure.

I learnt that the unique experiment was the brain child of Sumesh Goyal, Inspector General of Prisons and Corrective Law, who impressed upon the Shimla Municipal Corporation and the Himachal Tourism to join the initiative to help in this reformation mission. The cafe had been built at a cost of about Rs.20 lac for the tourists while the mission creeped in subsequently.

The smiling man behind the counter was eager to serve me with some drinks but I was much more concerned for the information. It is true that just newsy information was enough to quench the instincts of a journalist.

The counter man is a little withdrawn as he learns my motive. But soon he was spilling beans and I was all ears.

Jai Chand, as he introduced himself hails from Hamirpur in Himachal Pradesh. It was hard to believe that I was talking to a convict sentenced under section 302 of the IPC. The other guy Yog Raj i was informed also hailed from Hamirpur,. But I was told that he was out for an errand and would be back soon.

Aged around 50 years, Jai Chand had no remorse of the crime he had been convicted for by Session Court, followed by being equitted by the Himachal High Court but again sentenced by the Supreme Court of India.

Jai Chand is accused of strangulating his wife Vidya Devi way back in 2001. He explains that on the fateful day as he returned home from work he found his wife hanging from the low roof with her dupatta used as gallows. He admits that her feet were almost touching the ground and he took it to be a poor joke. But till he approached her and brought her down he could feel her pulse beating. As the neighbours assembled and poured water in her mouth which she did gulp a little. But she was declared brought dead in local hospital later. His marriage was 8 years old at that point of time and they had a 3 and half year old son and a 6 months old daughter.

Later to his relief from the High Court in 2004 he was set free. But the state, he told, contested the case in Supreme Court of India which finally convicted him under section 302 to life imprisonment. Jai Chand believes that the highest court may have been under pressure post the convictions in Nirbhaya case but the eternal court of God will deliver him true justice.

Talking about his family Jai Chand told that his conviction was no deterrent to the education of his two children. Though coming from a poor family background his son was now a student of BSc first year while his daughter was studying in class plus two.

About who was now taking care of the children, Jai Chand told that in 2005 he had married again and had two sons from the second wife who were studying in class 6th and class 2nd. They all were living happily together, he added.

During the 12 years period of his freedom after the session court conviction, Jai Singh had remained employed at the front office of Hotel Honeymoon at Shimla and later at Hotel Honeymoon at Manali till asked to surrender by the court upon his final conviction by the Supreme Court of India in 2013.

Jai Chand told that his mate Yog Raj was also convicted for life under section 302. The 27 year Yog Raj, he told, had been involved in a scuffle with his friends. The unfortunate punch of 21 years old Yog Raj on his friend however proved fatal leading to his death after a week long hospitalisation in Hamirpur. Serving life Yog Raj, I was told, had parents and elder brother to contest for him from conviction by Session Court in 2002 to High Court in 2016 but was unfortunately not acquitted. Yog Raj has already served the conviction of 5 years.

I learn from Jai Chand that under the reforms scheme the government of Himachal Pradesh was running such facilities at other jails too while in the Kaithu Sub Jail, there were about 70 prisoners including undertrials and at least 10 convicts were engaged in the bakery works, the produce of which was being sold through outlets near IGMC Hospital as well as near the Jail premises besides this Book Cafe.

Jai Chand, though disturbed, was a lot satisfied as he had been fruitfully deployed by the authorities. Everyday he reports at 9 am at the Book Shop with his bakery wares, cleans the area and remains fully occupied till 9.30 pm. On my enquiry about long working hours, Jai Chand appeared cool about working hours. He told that the Hon’ble High Court Chief Justice had shown his concern about the tourists’ needs which grew in the evening and beyond. All left over food stuff, he takes back to the jail where it is consumed in the canteen. The duos bring all fresh stuff from the bakery every morning, he tells.

Jai Chand is happy to be United with his family of five atleat during 6 weeks of parole every six months. His present, he feels, is his future too.

Young Yog Raj may have had many dreams about his life which have been reshaped by the circumstances. But he believes that one must live life as it comes by.
An hour or so later I come out of the Book Cafe trying to decipher the meaning of life and where it leads us to.