Manali: Actor-filmmaker Sunny Deol is working hard to give his son Karan a perfect launch for a career in films and is to begin shooting for his debut film ‘Pal Pal Dil Ke Paas’, a movie based on a romantic drama set in the beautiful mountains of Manali, Himachal Pradesh.

The 59-year-old star is also directing the project, which is being produced under their banner Vijyeta films. The film is to launch his elder son, Karan Deol. Sunny Deol decided to make a comeback in Bollywood after a sabbatical with the sequel to the action-packed film Ghayal,

Sunny Deol had been looking out for a young heroine to be cast opposite his son Karan Deol who will soon be making his debut in Bollywood. While Yas Raj Films (YRF) wanted to launch the star kid, daddy Deol wanted to take the reins of his son’s career in his own hands.

Bollywood star Sunny Deol has made it clear that his upcoming project will have most of the star cast including heroine in lead role from Himachal only.

After looking out for months and more than 600 auditions, Sunny has also finalized the films leading lady. Sunny has cast 18 years old Shimla based Saher Bamba for the role. He said that the film is a romantic action flick, titled Pal Pal Dil Ke Paas. The actress in lead role hails from Shimla and her father has a hotel in Manali. 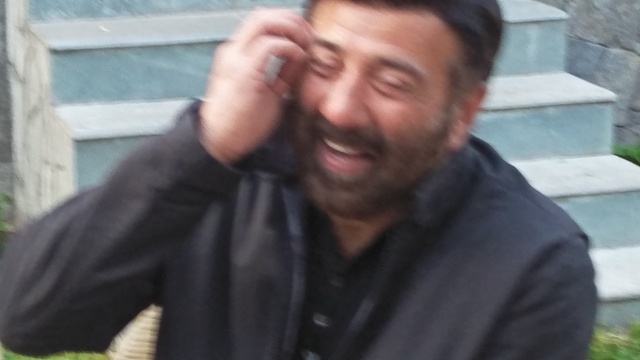 This is for the first time that a Bollywood movie is planned, scripted and will start and end in Himachal, especially in Manali. Sunny is launching his son Karan Deol with a home production romantic movie. He is camping in Manali for over a year to finalize the locations and actors. The superstar is staying in a cottage at Batahar village near Manali. The shooting will start in May.

Sunny disclosed to Hillpost that actor opposite to Karan Deol has been finalized from Himachal and her family members too are locals. “Many more actors in film have been taken from locality. A few are local actors while some will face the camera for first time. People will get to see many fresh faces including heroine. Names of actors will be officially disclosed very soon,” he said.

Sunny’s love for Manali, where he wanted to own a land to build film city, is known to all. He spends leisurely time here very often. According to sources he had planned to launch his son from Manali long back. He was searching for locations to shoot the scenes for last two years. However, various locations of Kullu-Manali can be seen in nearly a hundred Bollywood movies but the crew members PPDKP claims that all locations in movie will be fresh and never shot before.

Sunny has finalized an old house built with traditional Kullu architectural style at Shaleen village, 8km from Manali, where major part of the movie would be shot. The village is located high on the hillside and offers panoramic view of snow-capped mountain ranges and the lower valley. The house which is expected to belong to actor or actress is under renovation for shooting purpose these days. Sunny had recently visited the village and villagers had gifted him a Kullu cap and celebrated a local festival “Fagli” with him.

Film will create opportunity for many local youths to show their talent. Many locals will get jobs and movie will indirectly promote the rural tourism. Local coordinator for movie, Vikramjeet thakur, said: “All things have been finalized. The shooting will start soon. Film will have beautiful locations and Himachali actors.”

The shoot begins soon from next month but Sunny has not revealed any further details about the film. He disclosed to Hill Post that let’s wait for the official announcement which will be made very soon. He said we have fusion of Himachali traditional folk and culture. He added in songs and music local Himachali instruments are used. He revealed that we preferred local artist to give it more local touch.