Ten thousand tulips at a glance

A visit to Kashmir during the month of April is not complete without a visit to the world renowned Tulip Garden of Srinagar. Unconcerned of the unrest in the valley, mother Nature keeps playing. No amount of terrorism or curfews or street fights can stop the flowers from blooming. And where the flowers bloom, the bees are naturally attracted. Located close to Sirag Bagh Cheshmeshahi at the foothills of Zabarwan Range of hills it is not far from the famous Dal Lake. The Tulip Garden attracts thousands of tourists from India and abroad. The Garden is thrown open to the public in the first week of April when the garden is at full bloom. It remains open till end of April when the tulips start withering.

The Indira Gandhi Memorial Tulip Garden is named after the past prime minister of India and was previously known as Model Floriculture Centre. This year Jammu and Kashmir Tourism has also organised a mega Tulip Festival at this garden from 1st April to 15th April to showcase the beauty of Nature which is a part of the Bahar-e-Kashmir show. The Tourism department has been organising the show since 2007 and this year marked 10 years of the mega show.

This year, the opening of India’s longest 9 km tunnel between Chenani and Nashri on the national highway linking Jammu with Srinagar on 2nd of April also marked the opening of famous Tulip Garden for the public. The opening of the tunnel bringing the heaven on earth closure to the visitors was another attraction for us not to miss the great show of Nature at Srinagar. So we packed our bags and headed for the garden which we had often seen only in movies though we had visited other places of Srinagar once earlier but had missed out this show which comes only during the month of April every year. 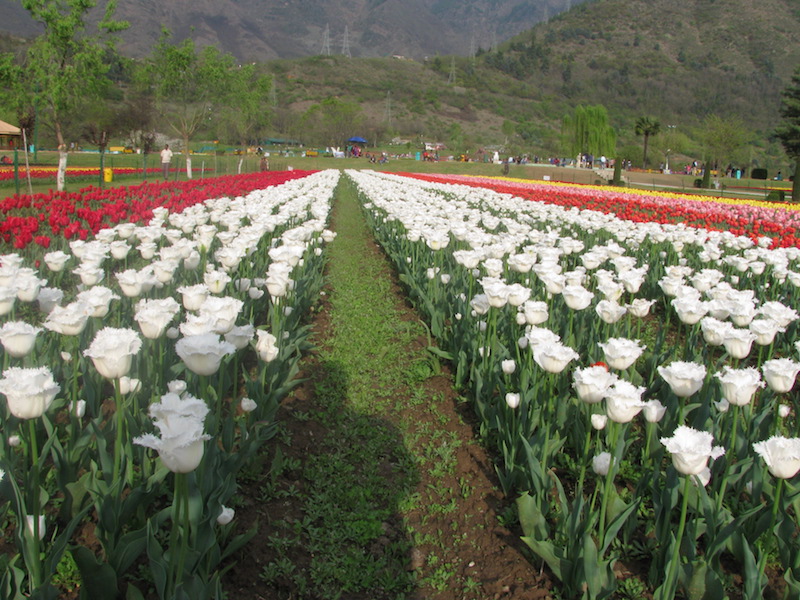 After relaxing overnight at a hotel close to the Lake, we headed for the Tulip Garden the next morning after breakfast. There is an entry ticket to the garden and we are also provided a leaflet about the history of the garden. The visit to the Garden was just another dream come true. Located on the foothills of Zabarwan mountains it is spread in an area of 90 acres of land. We were lucky to have been there at a time when the morning mist was giving way to a warm sun. The opportune time added to the show as the dew drops on the flowers glistened like pearls in the rays of sun. It was a full bloom period and we were eager to gallop from one type of tulips to the other. Inside view was just breath taking. “Door tak nigah main hain gul Khile hue”. Arrays of flowers in different colours and hues seemed to have painted the earth. The wonderful sight reminds me of the famous poem of William Wordsworth about Golden Daffodils

“Beside the lake beneath the trees,
Fluttering and dancing in the breeze,

Ten thousand saw I at a glance,
Tossing their heads in sprightly dance

I gazed and gazed but little thought,
What wealth the show to me had brought”

But here the tulips were in millions. Wish Wordsworth was here again to write another poem on Tulips. A closure look revealed that tulips were of different shapes and designs. For a common man a tulip is a tulip and a tulip, but we were surprised to find at least 15 varieties of tulips with exotic names like Laptop, Kung Fu, Blushing Lady, Blushing Apeldoorn, Ilede France, Jan Seignette, Margaritta, Hocus Pocus, Largo, Cape Holland, Avignon, Charade, etc. The tourists were seen posing themselves in front of vast spread meadows of flowers and also taking selfy’s. Some of the varieties we were told are being imported and planted here. The flowers bloom for some days and on attaining the fully bloomed status their petals start falling. Onset of May is the end of season, we learn.

Moving from one meadow to the to the other I keep taking pictures of the different varieties on my camera beside absorbing the imprint in my mind. In the middle of the garden there is a beautiful fountain sprinkling drops of cool water on the passersby. In the morning time the water is all the more cold. We take pictures from different angles till we drop down tired on the green grass.
It is two hours already as we move out of the garden taking a last glimpse to the lovely tulips. It is indeed a memory that cannot fade away from anyone’s mind.