Manali: How would you feel travelling  from a long journey and being welcomed by a pack of stray dogs to receive you in Manali. Certainly not a very good sight and even the thought of it.  But not kidding you, the scenario seems not merely a thought but Manali the popular tourist town is living with an overgrown population of stray dogs these days. Roaming freely in the vicinity of the Manali Mall road, the stray dogs have their gala time threatening the visitors.

Dogged by these strays, the Manali town is not a very pleasant one. The sight could still be ignored if these strays were a little sober as well. But to add to the misery of the tourists visiting the place and the residents, these dogs bark at them, chase them and act as a threat to their presence around. Posing a serious threat to the tourists at the Mall road of Manali,  only 500 mts patch spending more than five crores by public works department, were the tourist were supposed to roam freely  specially the  young kids and the aged fellows who find the premises as a danger zone because of the unwanted dogs. The Mall road is maintained by Manali Nagger Parishad Manali. 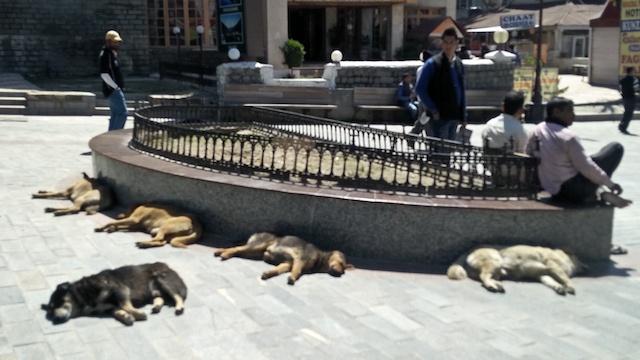 The tourist and residents seem very clearly annoyed with the menace. Pouring their hearts out and speaking about the issue, many have come forward to bring the true picture out in the front among the masses. “One can easily imagine the impression the Manali town gives to visitors, especially foreign guests when stray dogs welcome you at the mall road. “It’s not only an eyesore but also a big threat to the visitors here, Vinod, a local resident said.

Rashimi Chauhun a animal lover said that there are many causes for the stray dog problem. The most important reason is abandonment behavior by residents. A great numbers of dogs were abandoned by their owners for some reasons, such as family tragedies moving and getting married, sickness and intolerable physiological characteristics of pets, no money for treatment, unwilling to continue feeding. In fact, many stay dogs in Detroit were abandoned because their owners could no longer afford to keep them. She added stray dogs have many negative impacts on city environment and human health. Stray dogs cause noise pollution, fecees garbage and traffic accidents. Among Detroit’s many problems, this one tugs at the heart strings: thousands of stray dogs roaming the streets at night.

Rashimi revealed the stray dogs can cause a collision when dogs run into the road, which might even result in injury to other people and also to itself. Moreover, stray dogs have become a bigger threat to human health and lives. Stray dogs can transfer and spread Rabies a deadly disease. 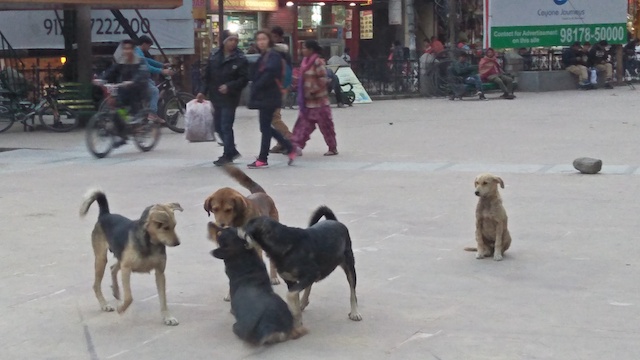 Arun Kumar  Tourist who had come to the Manali , said, “What if a dog bites a tourist, especially someone going abroad. You can easily imagine the situation of the victim in such a scenario.”

“They have occupied the entire Mall road and move freely in all streets here,” a shopkeeper Chandan said. He added that most of the tourists do not dare to walk on roads with packs of dogs. Another shopkeeper Manjeet Gulati  said, “Nobody expects stray dogs moving freely on the main shopping area of a tourist destination. Authorities should take action to control their population.”

Manali nagar parishad president Shabnam Tanwar said efforts were being made to keep the streets free from dogs. “We plan to sterilize and vaccinate stray dogs to control their population. We hope to make the town free of stray dogs very soon”.