Shimla: World CSR Congress has honoured SJVN with CSR Leadership Award in the category of “Best Corporate Social Responsibility Practices” while  N.L. Sharma, Director (Personnel), has been honored with Most Impactful CSR Leader & Life Time Achievement Award in individual at a function held at Mumbai today.

On this occasion Sharma told that SJVN had introduced various innovative practices besides institutionalization of  CSR. The innovative CSR practices of SJVN have helped in establishing its unique identity amongst stakeholders. 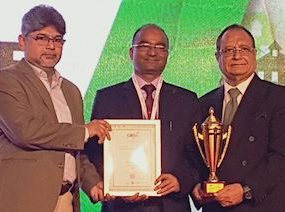 He further added that SJVN has made efforts to align the initiatives of Corporate Social Responsibility with the national issues and thus the CSR initiatives have been broadly classified into six verticals namely education & skill development, infrastructure & community asset development, health care & welfare, promotion & preservation of Culture/ Melas, sports etc., sustainable development, assistance during natural disasters. This helped SJVN to channelize its energy and resources into the direction wherein SJVN Corporate Social Responsibility matches with the national issues of importance.

SJVN had launched SJVN Silver Jubilee Merit Scholarship Scheme in the year 2012 which aimed at inculcating competitive spirit amongst students and to nurture their academic talent. The scheme is for 10+2 passed meritorious students wherein Scholarship @ Rs. 2000 per month is provided for the entire duration of the course. SJVN is presently operating 14 Mobile Health Vans in its Project Affected Areas in collaboration with HelpAge India. As many as 3.5 Lakh people have been treated through these vans. In addition to this SJVN in association with HelpAge India has organized 136 specialized health camps in project affected areas, which has benefited more than 35,000 people.

The CSR initiatives undertaken by SJVN demonstrate long term sustainability and reflect continued commitment of SJVN. The CSR programs are implemented in a manner that it ensures its active compliance with the spirit of the law, ethical standards, and international norms.