Fakirs may be closer to God but they do not make ideal Prime Ministers, in fact they pose a danger as leaders of nations. A man who has no stakes has no commitments for, as Bob Dylan said, "if you ain't got nothing you got nothing to lose."

The lemming is an Arctic rodent which multiplies geometrically. Once every few years something odd happens to them: they are overtaken by a suicidal impulse and millions of them fling themselves off cliffs and drown in the ocean below; no scientist has been able to explain why they do so. Something similar appears to be happening to our main opposition parties over the last month – they are self destructing, slowly but surely. Their conduct in both houses of Parliament and actions outside are irrefutable evidence of this. But unlike the lemmings, in their case we know the reason: frustration, lack of a specific agenda (other than a hatred of Mr. Modi), and inability to respond to the changing narrative he has generated.

The immediate trigger for this mass hara-kiri has been demonetisation. This paradigm policy shift is something all political parties (including the BJP), indolent in the stasis and inertia of the last three decades, were totally unprepared for. Lacking an existing template or the vision to develop a new one, all they have done so far is to paralyse Parliament, attempt to incite people outside into some kind of a civil disobedience movement, organise half-hearted dharnas, make outrageous claims of deaths in bank queues, selective leaks to cronies etc. They have even threatened to derail the GST dialogue in a scorched earth display of exasperation. None of it has worked. 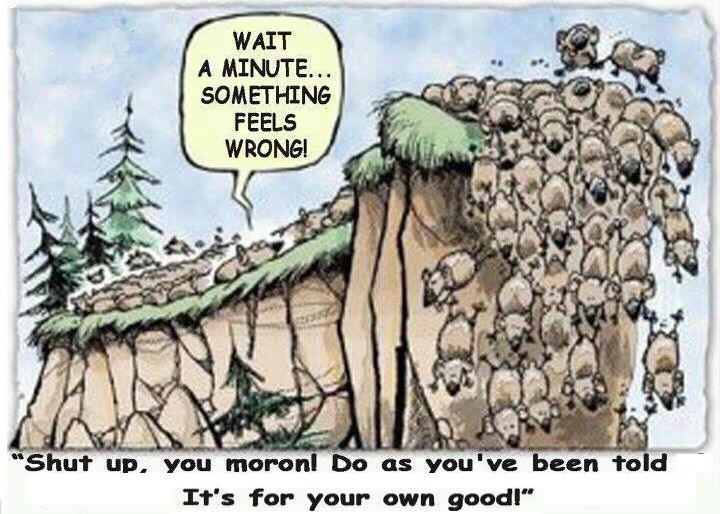 Demonetisation – or our own 8/11 – is something which will be discussed and analysed by economists and politicians till we return to the stone age (which, by the way, is inevitable: we shall either nuke ourselves out of existence or annihilate the natural environment to a point where no life will be possible on this sorry planet). But demonetisation is here to stay, such a monumental measure is irreversible and going back is more fraught with danger than going forward. Its logic is also impeccable. Its future is the promised land. All this Mr. Modi has been able to communicate to 1400 million Indians. The opposition parties – barring just a few – failed to see the logic of the measure, to understand its inevitability, or to distinguish between its substance and its implementation – the former is sound, the latter faulty. By clubbing both together they have muddied their own backwaters and are now thrashing around blindly, looking for an exit route. There isn’t one. The Government has messed up, without a doubt, but the Opposition has messed up big time.

There are plenty of mistakes – blunders even – in the manner demonetisation has been implemented: failure to calibrate the 200,000 ATMs in advance, failure to anticipate the chaos created by the shortage of legal tender in the economy, failure to plan advance printing of notes, failure to install more POS machines with vendors before introducing the reform (something which the government has now mandated the banks to do, in the millions), failure to anticipate the effects on farmers during sowing season, failure to factor in the job losses and impact on the informal sector. The list is long. The government’s only defence to this roster of omissions is to cite the need for secrecy. This doesn’t cut ice, much less the crap.

But that is not my point – the point is that the Opposition failed to exploit this, and they faltered in three ways: one, by attacking Modi rather than the policy; two, by debating the substance (which Modi had already successfully sold to the people and the world) rather than the implementation; three, by not raising these deficiencies in Parliament and by shutting Parliament down they denied themselves a powerful platform for exposing the government. Rabble rousing on the streets by Mamta Banerjee, Arvind Kejriwal, Sitaram Yechuri, et al. is no substitute for informed debate on such a serious matter. Even more ridiculous was the pathetic attempt to portray a routine go-around by a plane over Calcutta air-port as a conspiracy against Ms. Bannerjee’s life, or an annual Army exercise as a coup attempt, or the hacking of Rahul Gandhi’s twitter account as a BJP conspiracy! Nobody takes the Opposition seriously any more on this issue; even more important, however, they have conceded valuable time and space to Mr. Modi to rectify shortcomings and claim success.

He has used this precious time given to him on a platter in a masterful manner – he has frequently tweaked the original policy to make mid-course corrections, he is constantly amassing data to prove his claims on the existence of black money, and he has cleverly steered the original intent towards the advantages of a cashless economy. And most important of all, he is being successful in selling it to the people standing in the bank and ATM queues. Just consider the facts which have emerged: more than Rs. 50000 crores have been deposited in Jan Dhan accounts, 80% of which had zero balance just a month ago, seizures so far include Rs. 2000 crore in cash and 243 kgs of gold, more than a hundred dealers in gold and foreign exchange have been raided, banks report that digital transactions have doubled since 8/11, millions of new bank accounts have been opened, e-wallets are reporting as much as a 1000% increase in their business, property and gold prices have crashed. To the ordinary folks, this corroborates Modi’s refrain that the black money wallahs are on the run and that the country is happily gravitating towards a cashless economy. Neither of these are essentially true, but politics is all about perception and this is one war that Mr. Modi is winning.

He is weathering the crisis well, thanks to the walk over given to him by a combined Opposition. The next two years will be even better for him because by then the real and tangible benefits of demonetisation shall have kicked in: a massive expansion of the tax base, both direct and indirect, in the millions; significantly enhanced revenues for the government, both by way of penalties and expanded compliance; enhanced budget provisions for rural and welfare schemes; elbow room to reduce taxes; a quantum leap in financial inclusion and cashless transactions; a lowering of interest rates resulting in a fillip to industry and business; creation of more jobs. The icing on the cake will be GST ! By the end of 2018 Mr. Modi can legitimately claim that he has delivered on his promise of  ‘Achhe din.’ No Prime Minister can go to the people for votes with a better package. That is why I believe the Opposition has already lost the 2019 elections. Going forward from here they will have only nuisance value.

This is not a prospect that pleases me. I have always believed (and written) that Mr. Modi needs a strong Opposition to keep him honest, as they say in cricket. There is an ambiguity about his ideology and core beliefs that is disconcerting; he is authoritarian and uncommunicative; he cannot accept or accommodate dissent: he follows a “good cop – bad cop” routine towards the minorities; he regards the natural environment as a stumbling block towards development; he doth protest too much about his humble background, he can barely conceal his contempt for the judiciary. One of his biggest flaws is that he is too technology centric: in fact, this appears to be his blind spot: he genuinely believes – wrongly – that technology can solve all governance and social problems. A modern state cannot be built on technology alone; what is also needed are the softer values of equity, rule of law, transparency, free speech, tolerance of differences and dissent, social inclusion, a government that is genuinely compassionate. These are still lacking in Mr. Modi’s dispensation. What we do have in ample measure is a hubris of impressive proportions, evident in his recent statement: I am a ‘fakir’ and can give up everything and just walk away with my ‘jhola.’ Fakirs may be closer to God but they do not make ideal Prime Ministers, in fact they pose a danger as leaders of nations. A man who has no stakes has no commitments for, as Bob Dylan said, “if you ain’t got nothing you got nothing to lose.”

For all these reasons Mr. Modi needs a strong Opposition to maintain the balance that is crucial for democracies to survive. This no longer exists. A selfish, vision-less and ideologically bankrupt Opposition has ensured that the scales have tilted irrevocably in Mr. Modi’s favour and 2019 is now for him to lose.