Manali: A National Green Tribunal diktat for operating electric buses to save on environmental damage caused by coaches operated on diesel fuels has got the transport authorities here to initiate steps acquiring electric buses for public transport services in hilly terrain.

Speaking to reporters here on Tuesday, the minister said that tender documents seeking supply for 25 electric buses would soon be floated. These buses would be added to the existing fleet of Himachal Roadways Transport Corporation (HRTC) buses, he said. 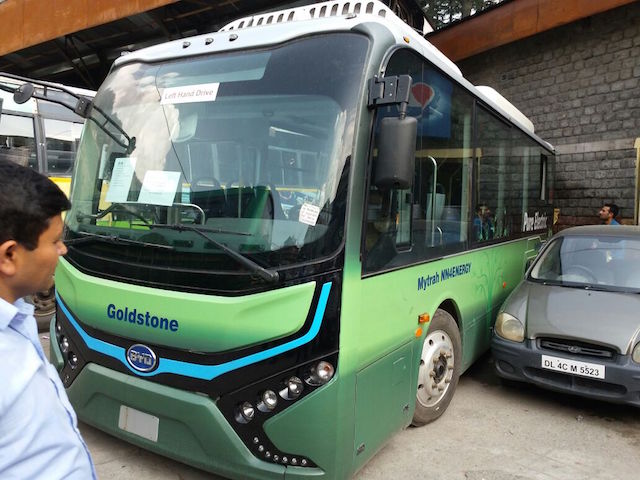 On the occasion, the minister also preformed a special puja before boarding an electric bus that was taken on a trial run on the steeply inclined 51 Km long Manali – Rohtang Pass highway.

“If the trials on the Manali  – Rohtang Pass route are successful, trials would also be carried out on other routes,” said Bali.

The trials are to be conducted for a 10 day period though on the first day the bus could not reach Rohtang Pass as a puncture near Kothi, (14 Km short of the 3400 meter pass) prevented its onward journey and the bus had to return to Manali.

Earlier the transport authorities in summer had conducted a successful trial of a bus powered by CNG, considered lesser  polluting that diesel, but the minister said that setting up a CNG fuelling station in Manali was taking longer than anticipated and the department began considering electric powered buses as a second option.

Pawan Kumar, an HRTC regional manager, said that the electric bus had an motor of 162 kilowatt capacity.

“Electric bus are brought to India by the Goldstone company. These buses require 100 KVA electric charger. It can run for about 200 Km after being charged for two hours. Two charging points, one at Manali and one at Marhi, have been installed,” he said.

The minister assured Him-Aanchal Taxi Operators Union members and other local tour operators that transporters that their business would not be affected. “Your problems would be kept in view when introducing electric or CNG buses,” he said.