Manali: The Manali – Sarchu road, a strategically important road linking up the India-China border, is in the lurch because Border Roads Organization (Project Deepak), an organization entrusted with the task build road infrastructure along the sensitive border, is unable to find contractors for undertaking construction and maintenance jobs.

The vital road that connects up with Leh in Jammu and Kashmir is used by army authorities each year for transporting supplies and personnel to guard the border round the year. More than 1500 army vehicles carrying supplies and over 20,000 army personnel ply on this road stretch each year, claim army sources.

With Central Bureau of Investigation (CBI) investigating allegations of misappropriation of public funds in construction of border roads, contractors have been reluctant to undertake new road contract jobs in this remote and high altitude region, forcing BRO to execute the works themselves.

“They neither have the required equipment nor the required manpower to undertake the road construction work in the Manali-Sarchu-Leh sectors,” said a source who is in the know of things.

Furthermore one of the contractors engaged facing problems in executing the job order at hand had taken the dispute to court, which has frozen work on an awarded contract also.

Despite the highway being very crucial in terms of national security, BRO is lagging behind its scheduled targets by several months.

Not having tarred a large portion of the road due to non-availability of contractors, Project Deepak is now planning to buy its own machinery to achieve the new target by 2015 and improve 222 Km Manali-Sarchu road into semi two-lane tarred highway.

Sources said that old contractors, who have approached the courts after CBI slammed them for irregularities in work and tenders have not been allowed to compete for new contracts. The works being undertaken by them are also moving at a snail’s pace.

BRO had invited bids from new contractors but none has shown any interest in the job order on offer.

Commander, 38BRTF (Border Road Task Force) Colonel KP Rajendra Kumar said, “We are executing most of the works ourselves. We now plan to set our own stone crushers and hot mix plants as we cannot depend on the contractors only.”

Col Kumar claimed that BRO had achieved its own targets last year also but could not complete the surfacing work. “This year too we have lagged behind in surfacing work because its contracts have not been done,” he said.

He added that the organization would try to keep the highway up to Keylong open till December 31 for convenience of people of Lahaul-Spiti as well as to keep the excavation work of Rohtang tunnel going from its north portal in Lahaul valley.

Colonel Kumar, who is actively involved in road maintenance work in the sector said that BRO had set a target for black topping the entire Manali-Sarchu road by 2015 but ifthe work spilled over, it would be completed by 2016 by all means. 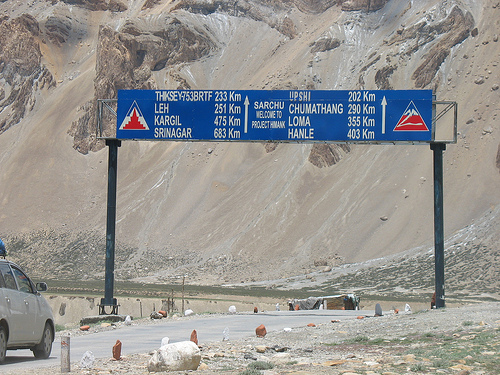 Maintenance of Manali-Leh highway is very tough due to extreme weather conditions. Severe cold conditions, heavy snowfall and landslides are the main problems that BRO engineers and jawans face throughout the year. Formation cutting, surfacing, permanent cement works and repair of old bridges are the main jobs on the highway.