Kullu: Punching the Modi slogan of ‘Dil Mange More’ that the BJP prime ministerial candidate recalled when remembering the Kargil war hero Cpt Vikram Batra at an election meeting in Palampur, (Himachal Pradesh), a week ago, Congress president turned it around to ‘Dil Mange Kursi’ saying that he had shamelessly tried to exploit emotions of war veterans and ex-servicemen for political gains.

At a rally here in Kullu, Gandhi said:

Charging Modi with selling dreams by portraying to be a panacea for all that ails India, the congress president cautioned that he was taking the nation down on the path of destruction.

She also added that:

Claiming that Congress believed and lived by peace and development by taking all sections of society along, she said that the party had worked for upliftment of poorer and weaker sections without being discriminatory.

Unlike the BJP we do not make false promises,’ she said while seeking votes for congress candidate Mrs. Pratibha Singh, who is the wife of chief minister Virbhadra Singh from Mandi seat. 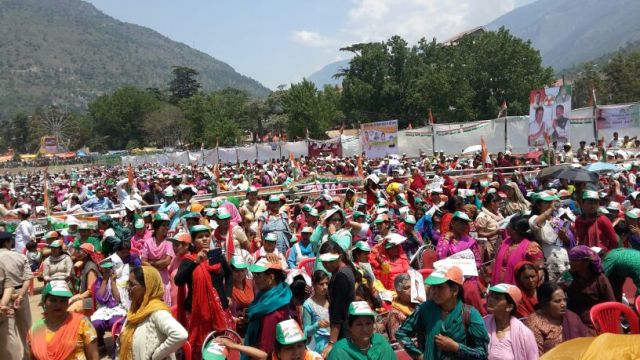 The congress president promised free treatment and medicines to poor people and pensions for disabled, old age and destitute.

It was the first visit of the congress president to Himachal Pradesh as the state readies to go to the polls on 7 May.

Of the four seats Shimla, Kangra, Mandi and Hamirpur for which polling will be held on 7 May, three Kangra, Hamirpur and Shimla are currently with BJP while Mandi elected congress candidate Virbhadra Singh in 2009 and after he resigned from the seat to become chief minister in 2012, his wife Pratibha Singh retained the seat for the party in a by election in 2013.