Shimla: Thirteen people, including two women, are reported to have died on the spot and 37 others sustained injuries when an Himachal roadways bus travelling into the interiors of the district lost control on the Shimla-Theog-Chopal road at about 4.30 p.m. today evening. 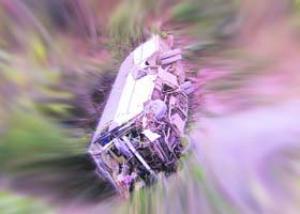 District police Chief Abhishek Dulhar, when contacted said that the injured had been shifted to hospital.

13 people included 2 women had died in the accident. Cause of the accident is not known immediately. The accident occurred at about 4.30 p.m., Dulhar told Hill Post.

Post mortem of the dead victims was done on the spot and the bodies had been handed over to the relatives whereas the injured were being shifted to nearby hospitals and the more serious ones to the state hospital in Shimla and other critical care centers, the police said.

The accident site is about 18 Kms from Theog, near Sanj on the road to Balsan-Chopal, he added. The bus was on its way to Neri in Balson region.