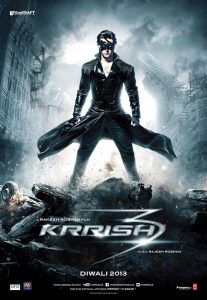 Nutshell:  Kaal is planning to annihilate the human race with his army of mutants (manwars) and wicked powers. But Krrish, who is better equipped with super powers this time, faces the demon head-on.

Krrish has returned again, this time with powers multiplied in triple. His punches hold more muscle and six-packs (maybe eight??) are firm as a steel chest. If only an equivalent level of intensity could be instilled in the storyline, the body would have gained some soul. Even though, the movie seems to be a mirrored version of archetypal Hollywood superhero flicks and characters blantantly borrowed from X-Men, Spiderman, Batman, The Incredibles and maybe The Avengers too, if not wrong, audience nonetheless is loving the drama.

And why not, it feels proud to find our movies standing to the very best, in terms of visual effects (totally homegrown). Shah Rukh Khan’s Red Chillies VFX studio and Pixion Studio spiced up the special effects, at a whopping price of Rs 260 million.

And mind you, there is a bit of Shaktiman too (pun intended) in Krrish this time – to find out where, watch the movie.

Krrish 3, which follows Koi mil gya and Krrish, directed by Rakesh Roshan is about a paraplegic genius scientist Kaal (Vivek Oberoi) who plans to end human race through his iniquitous powers & a mutant army of ‘manwars’ (cross breed of manav & janwar).  It’s Dr. Arya (Nasserudin Shah) who is to blame for the whole nuisance, crafting Kaal and his army of clones – Kaya (Kangna Ranaut), Cheetahwoman (Nazia Sheikh) and Antman (Sameer Ali Khan).  The story takes a turn when Kaal realizes that Krrish (Hrithik Roshan) and his scientist father Rohit Mehra (Hrithik Roshan in double role) are the guys hell bent on accomplishing invincible domination over the world, making way for a bloody war.

The story is up for a grab, only if the characters had been more unique. The very moment you start relating them to the same old Hollywood sci-fi characters, the charm subsides a little, if not entirely. The songs are distressing (and unnecessary) as are the dialogues in the flick. Rajesh Roshan, please hang your boots for God sake now. Last time too, he was accused of plagiarizing his songs. This time around he comes novel, but “Raghupati raghav raja ram/ Non-stop party, Aaj ki party, Celebrations tere naam” is a total ridicule, if worthy of being called a song at all. And, Priyanka who plays Priya Mehra is a party in disrespecting the religious song, yet again. The last time it was in Zanjeer, if you remember. But, background beats by Salim-Sulaiman are rocking.

There is no other reason to shell out some dough & watch the movie but Hrithik and his superhero ways, garnished with some outstanding visual effects. He plays double roles with phenomenal ease. The cheers in the audience acknowledge originality of his character. What do you need more, overly critical movie critics??

The concluding duel between Kaal and Krrish reminds of Matrix (hmph, again!)

The resemblance of the storyline to foreign references could be judged from the fact the original script by Rakesh Roshan was dumped for its similarity to Spiderman 3.

Priyanka, who in her earlier interviews had publicly boasted of the substance her role had, seems too inconsequential playing typical ‘bechari ladki’ running around saving her life in perfect cosmetic touches.

Kanga as Kaya is tempting. Her dialogue delivery has improved considerably and visibly outperforms ‘Piggy Chops’ in all departments. Vivek Oberoi for a change is good at what he does. The Rs 30.5 million budgeted Krrish 3 would be a true boost to the careers of both the struggling artists.

The production design deserves a pat on the back for creating outstanding sets. Cinematography by S.Tirru is worth mentioning.

3 D could have been a superior option, but what’s currently being offered is not much bad either. Take your kids to the movie this Diwali, as it’s far better than Chennai Express, the record-grosser for the year.

**The movie gets 3 stars on the scale of 5 from Hillpost.