Dehra Dun : Having come at the receiving end of not only his party high command but legislators also, besides the thousands of pilgrims who undertook the char dham yatra from all over the country and residents of the state ho have been lying under the open skies without food and water for days, chief minister has undertaken a massive self-saving exercise by announcing doles for all sections.

Though it is not sure how he will undertake the massive doles that were decided upon in a cabinet meeting on Monday, but it has brought him the necessary publicity in the media. Each family of all villages that are completely cut off will get free of cost 15 kgs rice, 15 kgs flour,, five kgs pulses, three kgs sugar, a litre of refined or mustard oil, 10 litres of kerosene, besides salt, spices and match boxes. 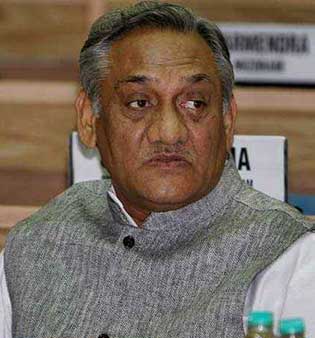 It was also decided that no interest will taken on loans that have been dispersed in the calamity affected areas of the state and the people will have the freedom to sell the debris in the form of boulders, stones, sand and other minerals that may have been deposited on their fertile land following the floods, for a period of three months.

It was also decided to waive off payment of all electricity and water bills for a period of almost one year from June 2013 to March 204 in the calamity affected areas. Students upto intermediate will be given Rs 500 while those in the ITIs, polytechnics and graduation and post graduation classes will be given a one-time Rs 1000.

Children who have been rendered orphans by the floods will come under the direct care of the state government, which will not only look after their day-to-day living but also of their educational and other needs.

Hoping that the announcements will give some reprieve to his government, which is reeling under severe criticism and flak for not only ignoring the warning of heavy rains given by the meteorological department, but the lackadaisical manner in which the rescue and relief operations were taken up and no coordination between the various departments of the government, the chief minister, however, has now to cope up with some of his party legislators.

Party MLA from Dharchula, Harish Dhami has started a dharna against the state government, stating that there was complete chaos in the rescue and relief operations that were undertaken after the tragedy and that the pilots and politicians had their say on the chopper flights, rather than attending to areas where most of the people were stranded.

Asserting that he will continue with his dharna till the plight of the people in the flood affected areas is remedied, he said that the affected people were neither given any shelter from the rain, nor provision made for their food and other necessities. “The government is paying Rs 75,000 per hour to the choppers that have been hired, but they are only transporting army and ITBP personnel and not lifting the flood affected to safe places”, he alleged.

Congress legislator from Kedarnath, Shail Rani Rawat also today threatened to sit on a dharna against the party government in the state, if it continued its neglect of the flood affected areas in her assembly segment. She claimed that her segment was the worst hit in the recent tragedy and more than 1000 people had died, but precious little had been done for relief and rescue in the area, she added.