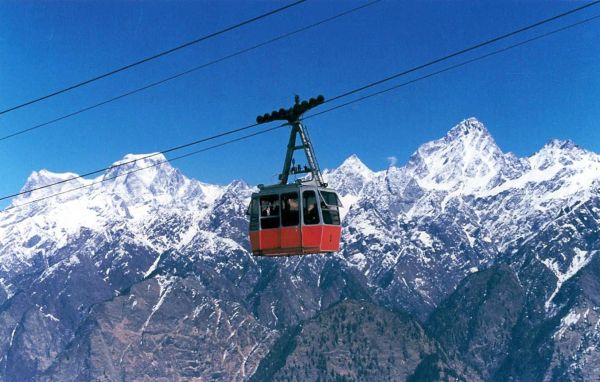 A Rs.250-crore aerial ropeway project connecting Shimla’s inter-state bus terminus at Tutikandi with the Mall road, the famous strolling street, will be built under the public-private partnership (PPP) mode, a government spokesperson told.

He said Chief Minister Virbhadra Singh gave approval to the project at a meeting of the Himachal Pradesh Infrastructure Development Board here yesterday (Monday).

The spokesperson said the ropeway would help reduce traffic congestion in the town.

He said the three-km ropeway would carry around 1,500-2,000 people per hour each way and the one-side travel time would be around 10 minutes.

Officials said the chief minister also gave the nod to link Aadi Himani Chamunda temple in the Dhauladhar mountain range in Kangra district with a ropeway.

This would help the pilgrims to visit the ancient hilltop shrine, which can be reached only through an uphill trek of about 16 km from the famous shrine of Chamunda Devi near Dharamsala town, some 250 km from here.

The Aadi Himani Chamunda six-km-long ropeway with a carrying capacity of 1,000-1,200 people per hour each way would be constructed at a cost of Rs.200 crore, an official said. He said the total travel time would be around 20 minutes.

He added that the presentation on a ropeway project to carry apples from Shimla’s prominent apple belt Kotgarh to Parwanoo, bordering Haryana, was also made by consultant Usha Breco Reality Ltd. at the meeting.

It undertook the feasibility study to transport the horticulture produce from Shimla district to Parwanoo.

The material ropeway would help reduce ground transport and traffic and would take off 64,000 truck trips at 40 percent capacity utilisation, says the study.

Upper Shimla areas alone account for 80 percent of the total apple production in the state.