Shimla: Infuriated by Mandi municipality not having carried out court orders of demolishing unauthorized structures erected on government lands since 2009, the Himachal Pradesh High Court directed the executive officer of the erring council to remove 20 unathourized structures within two weeks.

Taking cognizance of the courts orders of 24 June, 2009 and 20 September, 2010 in CWP No. 2289 of 2007­J, the division bench of Chief Justice AM Khanwilkar and Justice RB Misra observed that the authorities were directed to remove 47 unauthorized structures, which were identified after a due demarcation process undertaken by the court. 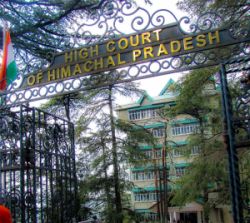 While the Mandi MC demolished 10 structures, two encroachers carried out the court orders on their own, suits affecting 15 structures were pending in appeal and for the remaining 20 structures there was neither any appeal or suit pending, the court noted.

“All these structures have been put up on the government land and admittedly are unauthorized as found by the court in the past,” the judges observed.

Taking a tough stance for non-compliance of court orders, the bench directed the executive officer of Mandi municipality to demolish the 20 indentified unauthorized structures forthwith and ensure that the demolition costs and use and occupation charges (arrears of land revenue) were recovered for the occupants.

Granting the officer two weeks time to carry out the court directive, the judges warned that noncompliance would be viewed very seriously.

Before listing the case for 31 July, 2013, the court noted that the position had aggravated because the authorities had failed to discharge their obligations of complying with court directions since 2009.

“What proceeding should be initiated against the erring officials is a matter which will be considered on the next date of hearing,” the judge’s order stated.

To carry out the courts order, the Mandi district collector has been directed to provide logistical support to the municipality executive officer, which included ensuring adequate police force. Both the Mandi DC and SP have been personally made responsible for complying with the courts direction.

The court also put on notice the 15 other unauthorized structures, in which suits are pending before courts, by announcing that they would be heard at the next hearing.