Dehradun: While there are numerous stories narrated by pilgrims who were evacuated of the major role played by the military and para-military personnel, without whose help hundreds felt they would have never returned alive, but the unsung heroes of the tragedy were the large number of women of the villages in the interiors, who spent hours cooking food and nursing children of the injured persons. 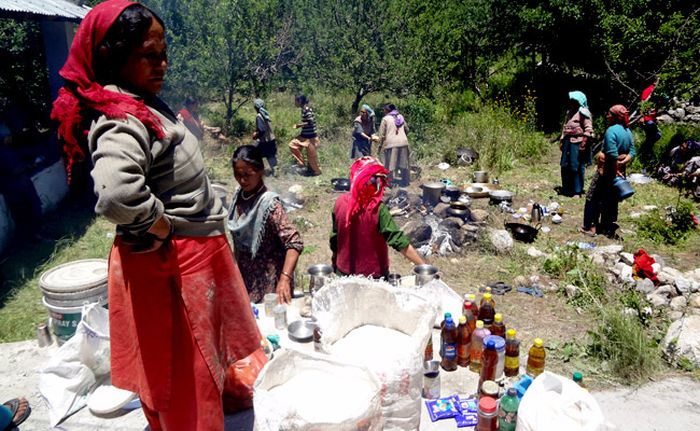 Countless first hand accounts have been published in vernacular dailies and shown on the electronic media how villagers pooled their ration and the women set up community kitchens to cook for the groups of people who had taken shelter in their villages. Though the villagers did not have enough ration to last them the month, but they opened not only their granaries, but also their hearts to meet the requirements of the stranded pilgrims.
Though women in the villages of Garhwal are normally very busy at this time of the year, attending to the crops in their fields, which meet their requirements of grains for the year, yet most of them did not attend to their crops and spent their time in the community kitchens, cooking and cleansing utensils, so that the stranded pilgrims did not go hungry.

There are even reports where they nursed the small children and looked after the injured women, helping them with their daily chores. In the absence of any help from the rescue and relief teams, as rescue and relief was badly disorganized during the initial part of the tragedy when the government was literally caught napping, the women folk, even went to the road heads to help the injured to the villages, so that they could rest in peace.

In fact most of the pilgrims who were later taken to helipads and air lifted by the choppers, who had spent days being fed and looked after by the village women, went back deeply thankful to the voluntary service that had been given to them. They went to the extent of saying that they had heard of the kindness of the villagers of Garhwal, but they did not know that they are noble souls.

But what is disturbing the villagers in the affected villages of the char dham yatra is the fact that the yatra may not take place for another two to three years, and even if it does later, it may not draw the same crowds that it did earlier. Should this happen, it will be a direct fall out on their livelihoods, as almost 60 to 70 per cent of the people were totally dependant on the earnings from the yatra for their year long needs.
While many of the youth had taken loans from banks to open small dhabas and restaurants, the more enterprising had taken loans for bigger ventures as hotels and guest houses. They now feel that they will not have any earnings to pay even the interest on the loans that they have taken forget the monthly or yearly installments.

Besides there were others who were working as guides or photographers or even taken taxis on loan to take the pilgrims to the various destination and not to mention those who had bought mules and ponies. All this section of the villager feels badly hit by the tragedy which has not only sut the yatra in its tracks but also put on stop on the yatra for atleast another couple of years.