Srinagar: Curfew was today imposed in Srinagar, many towns of the Valley and areas in Ramban district of Jammu while the Jammu-Srinagar highway was closed in the wake of protests after four people died in BSF firing yesterday in Gool village of Ramban district. 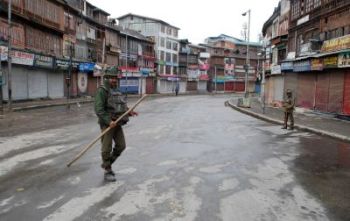 A senior police officer said: “Curfew has been imposed in entire Srinagar, Badgam, Ganderbal and Bandipora districts today. It has also come into force in Pulwama, Shopian, Kulgam, Anantnag, Sopore and Bijbehara towns.

“There was restrictions under section 144 in some other places today.”

Kashmir University has cancelled all examinations scheduled for today.

Separatist leaders Syed Ali Geelani and Mirwaiz Umer Farooq, who have called for three- and two-day shutdowns, respectively, to protest the killings, have been placed under house arrest in Srinagar.

Of the injured in yesterday’s incident, 25 people are being treated at Ramban district hospital, two at SMHS Hospital in Srinagar and 17 at Government Medical College Hospital in Jammu.

Trouble erupted in Gool village yesterday when villagers, alleging desecration of a mosque and beating up of the local imam by BSF personnel, stormed a BSF camp.

Locals have dismissed the BSF explanation as ‘fabrication’ saying that the troopers had opened fire at peaceful protesters.

Jammu and Kashmir Chief Minister Omar Abdullah also dismissed the explanation, saying the firing was “unacceptable and those involved will be brought to justice”.

Meanwhile, the Amarnath Yatra-bound batch of pilgrims was not allowed to move towards the Valley from Jammu because of the closure of the national highway.

Devotees were, however, allowed to proceed towards the holy cave from the two base camps of Baltal in the north and Nunwan (Pahalgam) in the south.