Dehradun: Uttarakhand now faces a new threat: possible outbreak of diseases as the waters from the flash floods recede.

A few diarrhoea cases have already been reported from Haridwar (Alwalpur), Uttarkashi (Udvi) and Rudraprayag (Chandrapuri), an official of the health ministry said. 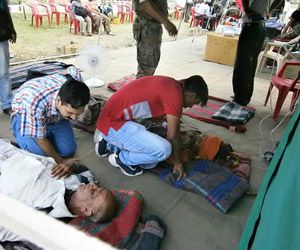 But no food or air borne has been reported.

Director General of Health Services (DGHS) Jagdish Prasad told: “A total of seven teams, including four from the central health ministry and three from National Institute of Mental Health (NIMHANS), Bangalore, have reached Uttarakhand to assess the threat of epidemics and other health issues.”

The teams from NIMHANS will provide psycho-social support to the victims.

Apart from this, teams of health experts from the state government have also fanned out across Uttarakhand.

Barsha Chakrabarty of NGO ActionAid says though as of now only cases of diarrhoea have been received due to water contamination, efforts should be made to contain any outbreak as and when it happens.

“There is an immediate need for medicines and clean drinking water (in the affected places),” Chakrabarty told.

The National Rural Health Mission is conducting health surveillance in all districts.

The state government teams include specialists from cardiology, psychiatry and internal medicine.

The Uttarakhand government has requested the central government to provide 60 drug and non-drug items. Three truckloads of these have already been delivered.