Mumbai: Rajasthan Royals co-owner Raj Kundra and his wife Shilpa Shetty are upset with how the media has “misconstrued everything” after the former was questioned by the Delhi Police here in connection with the Indian Premier League (IPL) spot fixing scandal. 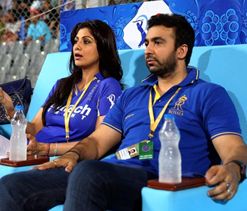 Kundra, a British national, who has businesses in Dubai, Ukraine and Botswana, was questioned here today, causing buzz in the media.

On Thursday morning, he woke up to news – “Raj Kundra faces the heat”, to which he responded: “Yes, it’s very hot in Mumbai.”

“Media has misconstrued everything using unreliable sources. Try speaking to the main guys at crime branch. Why does media hype things,” he added.

Kundra is now back in Mumbai but his passport has been seized.

“Is there an arrest warrant? I am back home in Mumbai. Kindly let Delhi crime branch do their work,” he added.

“Just to reiterate, we will do all it takes to reach to the bottom of this ‘spot fixing case’ and be of complete help till that happens,” she further posted.

Earlier, Kundra said he is only trying to help the crime branch in the case.

“Just for the media who spent a full day outside crime branch and didn’t get a bite – My visit to crime branch was to help them in the case,” Kundra had tweeted today night, after being questioned for more than 10 hours.

Delhi Police have arrested 26 people in the case, including S. Sreesanth, Ajit Chandila and Ankeet Chavan — part of the Rajasthan Royals team. While 23 people have been sent to judicial custody, two of them, Chavan and Sreesanth’s friend Abhishek Shukla, are on bail and bookie Tinku Mandy has been handed over to Mumbai Police.

The 26 people were Tuesday booked under the stringent Maharashtra Control of Organised Crime Act. Altogether, some 60 people have been arrested across the country in connection with the spot fixing case.