Chandigarh: The Punjab government Saturday announced that registration of marriages in the state would be mandatory in future.

The Punjab cabinet, which met here today, gave the go-ahead to the Punjab Compulsory Registration Marriage Rules, 2013, for registering marriages of the residents of the state. 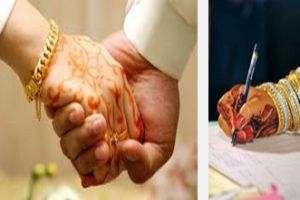 “All marriages were required to be now compulsorily registered under these rules within 90 days of the solemnization of the marriages,” a state government spokesman said here.

The cabinet also approved a policy to regularize unauthorised colonies in the state.

The spokesman said that this decision would be a big relief to about 5,000 colonies and nearly 200,000 individuals plot holders and building owners across the state.

“The policy focuses on bringing all the unauthorized colonies and buildings into the planning framework and to regularize the development, which would further facilitate the smooth implementation of the master plans across the state to ensure the entire urban development in a holistic manner,” he added.