Shimla: Himachal Pradesh Chief Minister Virbhadra Singh, who was stuck in Kinnaur district for the past three days since the area was cut off due to landslides, was airlifted today. Over a dozen sick and old tourists were also evacuated, an official said.

When the heavy rainfall stopped in the morning, the state deployed a government chopper to ferry the tourists stranded across Kinnaur. 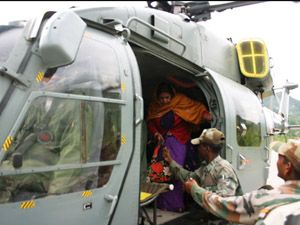 “The chief minister and his staff were airlifted from Sangla (village),” Deputy Commissioner J.M. Pathania told.

He said over the phone that the state-run helicopter was deployed to airlift stranded tourists.

At least 15 tourists, most of them sick and old, who were stranded in Sangla, some 275 km from state capital, for the past three days, were airlifted, he said.

Incessant rainfall in the region had triggered massive landslides that blocked the road leading to the picturesque Sangla Valley.

He said more sorties would be organised for the tourists later in the day.

“Work is on to reopen road link to the Sangla Valley and other major roads. Over 1,500 tourists are stranded across the district, mainly in Sangla area,” Pathania said.

On restoring road connectivity to Sangla, he said it would five to six days to reopen all major roads in the district.

A high alert has been declared in the district as more than 60 percent of the district was badly hit by heavy rain. Some areas in Pooh experienced snow.

Officials said 10 people have been killed, including five members of a family, in various landslide and rain-related incidents in the district since Sunday.

A government spokesperson in Shimla advised tourists not to venture into remote areas of Kinnaur, Shimla and Sirmaur as chances of rain heavy were high till today.

Legislator Jagat Singh Negi said the maximum damage to the property – both government and private – in the district was reported from the Pooh block due to snow.

The Hindustan-Tibet road leading to the China border along Kinnaur is blocked at several locations, said officials.