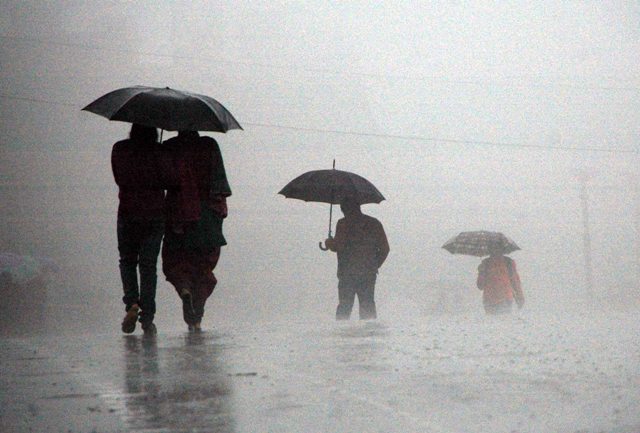 Dharamsala: Dharamsala and its surrounding areas had a heavy showers in the morning hours on Monday,when the day turned dark and rain lashed with thunder storm, bringing day temperature very low. This followed by bright sunshine during the day.

On Sunday too the city had wide spread rain throughout the day. Dharamshala received 59 mm rain which is the hieghest amount in the state that day, followed by Jogindernagar-41, Pandoh-30, Banjar-16, Baldwara-15, Gohar-8, Jubbal-7, Baijnath & Dalhousie-6 each, Nurpur, Palampur & Mandi-5 mm of rain each. Dharamsala recorded a max of 30.2 and minimum of 19.6 degree Celsius temp on Sunday.

The weather office of state say Precipitation occurred at isolated places in Himachal Pradesh during last 24 hrs. it predict Rain/Thundershowers at few places and snow in higher reaches Western Disturbance (W.D) as an upper air system over north Pakistan and neighborhood in the next 24 hours. There was no appreciable changes in Maximum and Minimum temperatures in last 24 hrs.