Chandigarh: Rescue teams evacuated 52 villagers, including 15 children, from a riverine island as the waters of the Yamuna river swelled Sunday in Yamunanagar district of Haryana, an official said here today. 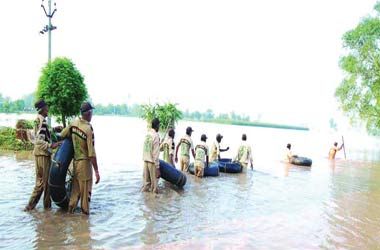 A team of the National Disaster Management Authority (NDMA) and the Indian Air Force (IAF) helicopters rescued them.

The rescued villagers are from Lapra village in Yamunanagar district, 120 km from here.

Rescue operations were also on in Karnal district where nearly 200 people were stranded in Shergarh Tapu and Chandrao villages, 130 km from here.

The Yamuna river, which enters Haryana from Uttarakhand at Hathnikund barrage in Yamunanagar district, had swelled in the last 36 hours after over 800,000 cusecs of water was released today morning through the Hathnikund barrage, officials said here.

Over 4.7 cusecs of water had been released from the barrage Sunday.

The Haryana government has issued a flood warning to district authorities in Yamuna’s downstream districts of Karnal, Panipat and Sonepat. The river then enters Delhi.

The spokesperson added that the army at Ambala was on standby to meet any eventuality due to floods.