When a purposeless screenplay conjoins a series of poorly fashioned dialogues and the final dish is garnished with toppings of boredom and misdirection, something called Ghanchakkar comes out of the tandoor. A recipe for a sure disaster, the flick has little in offer to the movie-buffs yearning for something anew, this weekend. 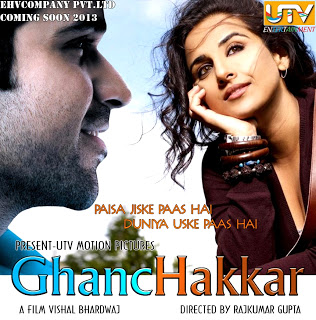 Sanju alias Sanjay Atrey (Emraan Hashmi) is a tested burglar, who specializes in safecracking. He resides in Mumbai with his fashion-conscious wife Neetu (Vidya Balan). Sanju is approached by small-time goons Pandit (Rajesh Sharma) and Idris (Namit Das) with an intriguing proposal to embezzle a bank. They conspire in accord and accomplish their plan to precision. The other two plan to hand over the heist money to Sanju, to congregate after three months, when the situation cools-off. But, the tragedy strikes and Sanju meets with an mishap, only to lose his memory; with no remembrance where he stashed the burgled money. The story commences now, and the two irate accomplices get behind his life with a pistol in hand and expletives on lips to get back their share of plunder.

Produced by Ronnie Screwvala and Siddharth Roy Kapoor from UTV motion pictures. Ghanchakkar is a spectacularly made mindless flick, which lacks a plot right from the word go. Raj Kumar Gupta, the director, is himself irresolute what he is up to.

In order to make it intriguing, the scriptwriter turns it into a sequence of dreaded tales. The same old ‘ghisa pita kissa’ — three robbers getting into unison to pull out a bank heist – of course effortlessly; then abandoning each other, only to meet after some time. Yet, director has managed to spice up the story more, as one of the robbers (Emraan Hashmi) loses his memory during the time period and becomes a Ghajni. The only thing he doesn’t fail to remember is how to make love with his wife almost every night after drinking glasses of red wine while watching movies ( of Tarzan genre) on Zee cinema at night.

Who can anticipate the maker of cherished Aamir and No One Killed Jessica to come out with such a horrendous piece of cinema that only teaches students of filmmaking — What not to do while making a movie?  Emraan Hashmi looks completely out of sorts and his lost ‘yaddasht’ makes him more unendurable. Not only is he unable to locate the misplaced bag throughout the picture, his Sherlock Holmes style exploratory ways at the end make him all the more idiotic. Vidya Balan has nothing to do but wearing strapped night gowns and live in the hangover of Silk Smitha from The Dirty Picture. Her dress code has been completely borrowed over from the last movie’s wardrobes. Such a gifted actress has nothing to do than to reveal her flesh and read Cosmo / Vogue. It is the least expected when your hubby (Siddharth Roy Kapoor) is pumping moolah in the movie.

The persuasive conspirator Rajesh Sharma and his young sprightly collaborator Namit Das (in a habit to ply his perfectly oiled pistol at the slightest annoyance) tried hard to create some “hansi ke putt’ but in vain for sheer lack of scope for any serious humor, due to lazy dialogues. Even their shedding down of clothes and other antics seem ineffectual.

The screenplay by Raj Kumar Gupta and Parveez Sheikh is meaningless. The dialogues are lacking soul as is the music. Ghanchakkar is overstretched, clueless, bungling and boring despite having a reasonable ending but only climaxes don’t define a successful flick. Hope it was such.

As the movie ends, even audience teams up with the other characters in the story to ask Emraan — Where’s their money gone?

Something that is certain; many movie buffs must have stepped out of the cinema hall with Amnesia. At least I was the one!

*The movie gets 1 ½ stars on the scale of 5 from Hillpost.