The swearing in of new ministers is scheduled for 5.30 p.m. at Rashtrapati Bhawan. 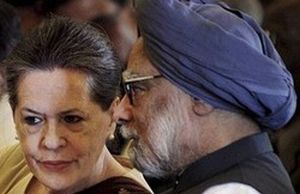 The exit of the erstwhile allies DMK and the TMC, as well as the resignations of Pawan Kumar Bansal, Ashwani Kumar, C.P. Joshi and Ajay Maken, have created vacancies in the cabinet.

Bansal resigned after his relative was accused of taking money for a plum post in the Railway Board. Ashwani Kumar quit on charges of vetting a CBI report on the allocation of coal blocks. Joshi and Maken resigned over the weekend and have been given Congress party charges for the Rajasthan and Delhi assembly elections later this year.

Mallikarjun Kharge is likely to be shifted to railways ministry from the labour ministry, while Congress leader from Rajasthan Sis Ram Ola might be given charge of the surface transport ministry, previously held by C.P. Joshi.

Another MP from Rajasthan, Girija Vyas might step in as housing and urban poverty alleviation minister in place of Maken, who resigned Saturday.

The cabinet reshuffle will come a day after the overhaul of the Congress party apparatus in which Maken and Joshi, along with Ambika Soni and Gurudas Kamat were brought in as general secretaries, while Health Minister Ghulam Nabi Azad and Oscar Fernandes were dropped from the posts.

Meenakshi Natarajan, considered close to party vice president Rahul Gandhi, might also find a place as a minister of state. The name of Birender Singh, who was dropped as Congress in-charge of Himachal Pradesh and Delhi is also doing the rounds for a berth.