New Delhi: The BJP plunged into a crisis today, barely a day after it named Narendra Modi to lead its campaign in the next Lok Sabha elections, with the veteran L.K. Advani declaring he was quitting all major party posts and accusing most BJP leaders of pursuing “personal agendas”. The party rejected his resignation. 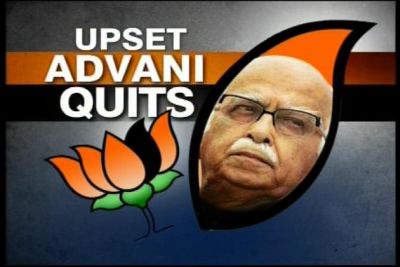 Advani’s stunning decision, if not reversed, is bound to have a bearing on the acceptance of Modi as the BJP’s prime ministerial candidate in the 2014 Lok Sabha elections. By evening, the BJP’s top leaders were huddled with Advani at his residence, trying to persuade him to change his mind.

With its rift out in the open, an embarrassed Bharatiya Janata Party hurriedly called a meeting of its parliamentary board, one of the three bodies from which Advani resigned, the others being the national executive and the election committee.

“The parliamentary board decided to reject the resignation of Shri Advaniji,” party president Rajnath Singh told reporters after a meeting of the board at his official residence here.

Rajnath Singh said he will not accept Advani’s resignation under any circumstance.

Some of the leaders went to meet Advani, 86, after the parliamentary board meeting to persuade him to withdraw his resignation.

From Gujarat, Modi, 62, made a passionate appeal to Advani to take back his resignation and appealed to the elder not to disappoint “lakhs” of party activists. But Advani refused to budge.

Advani, who helped the party to grow from an also-ran into a powerful entity in the 1980s and gave it its hardline Hindutva ideology, had failed to dissuade the BJP from elevating the ambitious Gujarat chief minister to the chief campaigner of the party.

In a stinging letter to Rajnath Singh that was made public, Advani said he found it “difficult to reconcile either with the current functioning of the party or the direction in which it is going”.

The three-para letter made no reference to Modi, who for years enjoyed Advani’s patronage, but its tone made it evident that the resignation was linked to his elevation at a party meet in Goa yesterday.

The decision to name Modi head of the election campaign committee would have made the Gujarat chief minister – the BJP’s best known Hindutva icon – its virtual face in the Lok Sabha elections.

Advani, who led the BJP in the 2009 general elections which it lost, kept away from the Goa national executive meet citing poor health.

“For some time I have been finding it difficult to reconcile either with the current functioning of the party, or the direction in which it is going,” said Advani, increasingly overshadowed in the BJP by second-rung leaders.

He said he no longer had “the feeling that this is the same idealistic party” formed in 1951 by Shyama Prasad Mookerji, Pandit Deen Dayal Upadhyay, Nanaji Deshmukh and Atal Bihari Vajpayee “whose sole concern was the country and its people”.

“Most leaders of ours are now concerned just with their personal agendas,” said Advani, in one of the harshest condemnation of BJP leaders by anyone within, bringing its internal rift out in the open.

“I have decided, therefore, to resign from the three main fora of the party: national executive, parliamentary board and the election committee. This may be regarded as my resignation letter.”

Advani remains an ordinary member of the BJP.

The resignation stunned the BJP. The Rashtriya Swayamsewak Sangh (RSS), the BJP’s ideological parent, called it a “very unfortunate” development.

The BJP’s allies were worried. Janata Dal-United leader Sharad Yadav said: “It is sad… It is not good for NDA’s health.”

JD-U leader K.C. Tyagi added: “It is tough for us to remain a part of the NDA now that the BJP’s tallest leader is gone.”

Congress spokesperson Renuka Choudhary said: “I’m not surprised. BJP is politically bankrupt, they have sidelined people responsible for building it.”

The Karachi-born Advani, who some years ago fell out ideologically with the party core for suggesting that Mohammad Ali Jinnah had a secular vision for Pakistan, and the now ailing Vajpayee have been for decades the two pillars of the BJP and its earlier incarnation, Bharatiya Jana Sangh.

Advani joined the RSS in 1947 and the Jana Sangh when it was founded in 1951. He became the BJP president in 1986, when it had only two members in the Lok Sabha, and soon became a strong votary of the Ram temple movement, which culminated in the demolition of the Babri Mosque in 1992.

The Ram temple campaign helped the BJP to grow and grow, until it finally took power nationally in 1998 as head of a coalition.