Jammu: The army troops today recovered a huge cache of arms and ammunition from a remote mountainous area of Reasi district in Jammu and Kashmir, an official said. 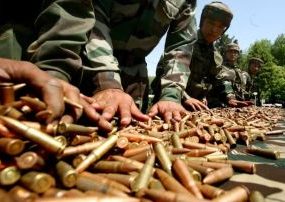 “Based on a tip-off about a possible militant hideout in Sarh area of Reasi (about 180 km north of Jammu), a joint operation was launched with the state police. Five hand grenades, five UBGL grenades, 10 kg of explosives, a number of AK rifles and ammunition were recovered,” an army spokesperson said.

“The items were found wrapped in a polythene sheet buried one feet under the ground and were detected with the help of deep search metal detector,” the spokesperson added.

Citing information provided by locals, he added that the arms and ammunition were buried by militants operating in the region in 2004-2005.

“The explosives and grenades were destroyed on the ground by blowing them up as they could have been detrimental to the security of the local populace,” he said.