Saville (Spain): Airbus Military has launched an uprated C295W medium transport aircraft with winglets and more powerful engines with an eye on the Indian military and civil aviation market. 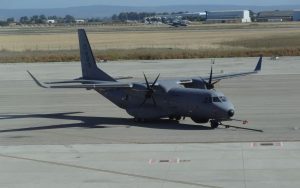 In official briefings at the recent launch ceremony here, company officials mentioned India more that a dozen times in view of the impending replacement of 56 HS-748 transporters of the Indian Air Force (IAF) while Airbus Military Chairman and CEO Domingo Urena-Raso told India Strategic (www.indiastrategic.in) that he expected the number of selected aircraft in this category to be more than 100.

According to India Strategic’s own estimates though, the figure could touch or exceed 200, keeping in mind the growing requirements of the armed forces, paramilitary organizations like the Border Security Force (BSF) and Central Reserve Police Force (CRPF), civil operations in India’s mountainous Himalayan states and even the secretive Aviation Research Centre (ARC) of India’s external intelligence agency, Research and Analysis Wing (RAW).

The aircraft is to be produced in the private sector, and once the assembly/ production line is set up in the country, new and follow-on orders are easier to get.

Urena-Raso, who can be described as a very pleasant and confident person based on the interaction he had with visiting journalists and this writer, said Airbus Military was in touch with some Indian companies for the aircraft’s production in India as per the IAF’s recently-issued Request for Proposals (RfP) – or tender – but gave no details. He pointed out though that a production facility is only about four to five percent of the costing in an aircraft’s manufacturing project.

The first C295W – W denoting winglets – was displayed before a group of visiting journalists from around the globe.

Rafael Tentor, senior vice president, said that the 90 kg of winglets and modifications added to the existing C295 aircraft would enable it to operate in India’s hot as well as high Himalayan airfields.

The engines have been given new settings.

Said Tentor: “The aircraft uses the same Pratt &amp; Whitney (Canada) PW127 turboprops engines which power all versions of the C295. The increased power is available from implementing new procedures recently certified by Canada and Spain, permitting operation in the climb and cruise phases at higher power settings at the discretion of the operator.”

“When implemented at higher altitudes and hot temperatures, these procedures improve operation over very high terrain such as the Andes (in South America) or the Himalaya mountains with only a minor influence on maintenance costs. The winglets were demonstrated in flight-trials which showed positive results for a weight penalty of only around 90 kg,” Tentor added.

The first production C295W will be available from end-2014. The aircraft can carry troops, equipment, electronic warfare systems or an Airborne Early Warning (AEW) antenna.

Tentor said that over the 2003-12 period, Airbus Military has commanded a 51 percent share of the light and medium aircraft (C235/C295) market with 157 (of the global total of 306) aircraft purchased by about a dozen countries.

Both Urena-Raso and Tentor pointed out that defence budgets in the US and Europe were shrinking and that global arms and aviation firms were increasingly looking to Middle East and Asia, particularly India, which has to replace most of its outdated Soviet-vintage equipment.

As for India, the IAF’s RfP has been sent to eight contenders from Europe, the US and Russia. As per the tender, which has to be submitted by October, the HS-748 replacement aircraft has to be made in India in collaboration with an Indian partner with technology transfer and production arrangements. The global vendors are reportedly in final stages of finalizing their tie-ups.

Airbus Military’s C295W and Alenia Aeronautica’s C 27J Spartan are putting up a tough fight. The latter has engines and configuration similar to Lockheed Martin’s C130J which IAF has acquired (6 + 6 aircraft) and maintenance should be easier with some element of commonality.

The only problem is that Alenia is a Finmeccanica company, which also owns AgustaWestland. The IAF’s order of 12 VIP AW101 helicopters from it is under the scanner due to allegations of kickbacks emanating from Italy.

The Indian defence ministry has also ordered a Central Bureau of Investigation (CBI) inquiry and till it clears Finmeccanica of any wrongdoing, its chances of winning any Indian tender from the army, navy or air force are near impossible.

IAF had acquired the HS-748 Avro from Britain’s Hawker Siddeley from 1964 onwards. It was later produced by India’s Hindustan Aeronautics Limited.