New Delhi/Dehradun: At least 11 people were killed and 50 others reported missing as thousands remained stranded by landslides set off by incessant rain in Uttarakhand, a disaster management official said here today. With more rains expected, officials warned that the situation in the hill state may worsen. 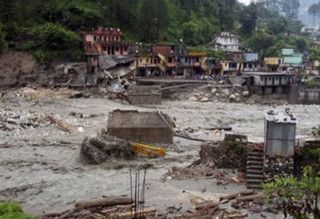 As a result, the annual Kailash Mansarovar yatra has also been suspended owing to the incessant rains and consequent landslides.

Rescue operations are being carried out by the army, para-military and disaster management authority.

According to M. Shashidhar Reddy, vice president of the National Disaster Management Authority (NDMA): “More than 50 people are missing, 11 are confirmed dead. Thousands of pilgrims are stranded in Uttarakhand.”

He also said that National Disaster Response Force (NDRF) officials are finding it difficult to move heavy machinery to the rescue site, but remain in constant touch with state officials in Uttarakhand.

“Twelve of our NDRF teams are there already, even Indo-Tibetan Border Police (ITBP) and army units have also reached Uttarakhand for rescue operations,” Reddy said.

The rains, which began Saturday night, have continued for the past two days. The Met department said the rains in the month of June have since broken an 88-year record. Between Saturday and Sunday, the state capital received 220 mm of rains and by evening, another 220 mm of rains.

Following the heavy rains, the Char Dham Yatra has been halted and thousands of pilgrims are stranded enroute to Badrinath, Gangotri, Kedarnath and Yamunotri.

A house in Prem Nagar area of Uttarkashi collapsed while several cars parked near the banks of the overflowing rivers were washed away by the strong current.

Reddy said that from next year, the NDMA would get in touch with the met office to get accurate weather forecast.

“Just like the IMD (India Meteorological Department) provides forecast for the Amarnath and Vaishno Devi yatras, we will have the same for the Char Dham yatra,” he said.

Thousands of tourists, pilgrims and residents have been rescued by the Indo-Tibetan Border Police (ITBP), involved in the rescue operations in Uttarakhand as heavy rains continued to wreak havoc in the hill state.

After a cloud burst in Rambada, 50 people were reportedly untraceable.

The worst-hit areas include Rudraprayag and Uttarkashi, where Mandakini river is in spate. In Rambada, the river water entered the market area.

“Thousands of yatris stranded near Govind Ghat, en route to Hemkund Sahib, were rescued… they are being accommodated in various shelters in Joshimath,” he said.

“A shelter and emergency medical centre has been established at the ITBP campus in Joshimath,” added Pandey.

With the met department having forecast more thunder showers, the already grave situation may worsen with more landslides as the hillsides have become weak following incessant rain, said the National Disaster Response Force (NDRF), which works under the NDMA.

“Both rain and landslides are problems. Hills have become weak… if there is more rain, there is risk of the hills collapsing,” a NDRF spokesperson said.

Movement of traffic on National Highway 58 has also halted in the wake of the incessant rain.

As many as 123 roads in the Garhwal region have been blocked, a public works department (PWD) official said.