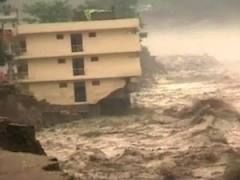 He also said National Disaster Rapid Force (NDRF) officials are finding it difficult to move heavy machinery to the rescue site, but remain in constant touch with state officials in Uttarakhand.

“Tweleve of our NDRF teams are there already, even Indo-Tibetan Border Police (ITBP) and army units have also reached Uttarakhand for rescue operations,” Reddy said.

The rains, which began Saturday night, have continued for the past two days. The met department has forecast even more thundershowers.

After a cloud burst in Rambada 50 people were reportedly untraceable.

The worst-hit areas include Rudraprayag and Uttarkashi, where the river Mandakini is in spate. In Rambada, the river water entered the market area.

There is no official confirmation of the number of people feared to have been washed away in the floods. Residents say at least two dozen people were swept away in strong currents.

The Met department has said that the rains this year in June have broken an 88-year record. Between Saturday to Sunday, the state capital received 220 mm of rain.

Rains have also halted movement of traffic on National Highway 58.

As many as 123 roads in the Garhwal region have been blocked, a public works department (PWD) official said.