Addressing members of the Himachal Pradesh assembly at its Golden Jubilee celebrations, Mukherjee appealed to leaders of political parties to discuss and find a solution to this problem.

“Every legislator has got his job after begging people for their votes, and after gaining their trust. It would not be fair if he does not discharge his responsibilities,” he said in a 20-minute extempore speech. 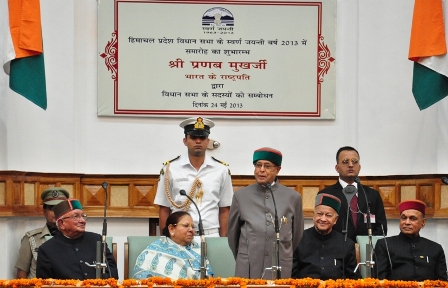 “The cardinal principle of effective functioning of a parliamentary system is that the majority would rule and the minority would oppose, expose and if possible, depose.

“But this should be done within the framework of rules framed by the legislatures themselves,” said Mukherjee, who has held a long list of political posts.

The president said the role and functions of an assembly can be described as three D’s — debate, dissent and decision.

“A fourth ‘D’, that is ‘disruption’, should be strictly avoided,” he said. “Disruption has no role in a parliamentary democracy. It is a small minority forcing their will on all others.

“Neither are they doing their job nor letting others do theirs,” the president said, while voicing confidence that the Indian political system was capable of finding a solution to the problem.

“My second suggestion to the younger friends is that they should devote time on debate for making laws and passing money bills.”

Recalling the initial years of Parliament, he said in its first three sessions, a majority of time was devoted to discussions on money, finance, budget and making laws. “Now only 30 to 35 percent time of the parliament is spent on most important business.”

Complimenting the Himachal Pradesh assembly for holding disruption-free sessions, he said “it speaks well about our democratic system”.

The President said elected representatives have exclusive control over money and finance.

“No expenditure can be incurred by the executive without approval of legislature, no tax can be levied except by a law passed by the legislature Therefore, the legislators must ensure adequate discussion and scrutiny before passing of legislation.”