Dharamsala: There would be no practice session today at Dharamsala cricket stadium as the two IPL teams Kings XI and Delhi Daredevils only played a match yesterday and would be travelling today.

Both teams will not practice of hold a press conference ahead of the match scheduled for tomorrow, said Mohit Sud, spokesman for Himachal Pradesh Cricket Association said. 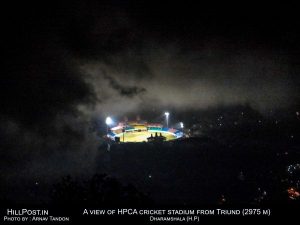 Kings XI and Delhi Daredevils teams are travelling from their yesterdays match venues to Dharamsala, he added

While Kings XI Punjab, the team owned by Preity Zinta, landed at Gaggal Airport at 11 a.m., the Delhi Daredevils team is scheduled to arrive at 3 p.m. today. Mumbai Indians, the other team that is scheduled play at Dharamsala is to arrive on 17th May.

The Gaggal Airport, Kangra for the past 8 months has been without any flights, despite the government of Himachal Pradesh making frantic request for obtaining regular air connectivity to the three airports of Shimla, Kullu and Dharamsala in Himachal Pradesh.

With the onset of the IPL season, Air India announced starting flights to Kullu and Dharamsala and only yesterday did test flights.