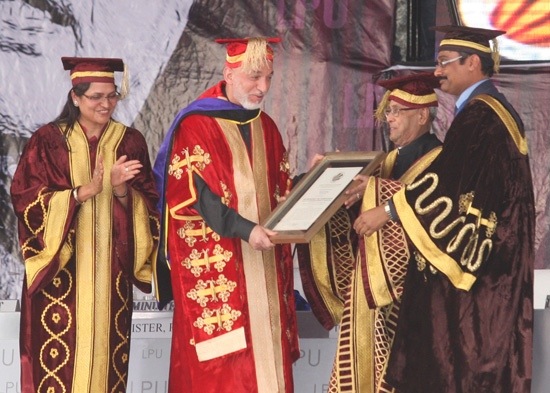 Jalandhar: President Pranab Mukherjee Monday called upon universities to lay emphasis on imparting vocational training to youth in the country while pointing out that by 2020, two-third of the workforce in the world would be from India.

Addressing a gathering at the third convocation of the Lovely Professional University (LPU) near here, Mukherjee, who conferred an honorary degree of the varsity on Afghanistan President Hamid Karzai, said that India is adding 1.2 crore workforce each year and it was the universities’ responsibility to convert this manpower into productive hands by imparting them vocational training to enhance their employability.

He said that at present only seven percent of the work force is getting skill-development or vocational training.

Mukherjee and Karzai arrived at the LPU campus near this Punjab city, 150 km from Chandigarh, Monday afternoon. Karzai, who specially flew in here from Kabul via Chandigarh, was conferred with a honorary doctorate of social sciences – the first honoris causa degree awarded by the LPU.

With nearly 30,000 on-campus students, the LPU is one of the biggest private universities in the country.

Calling upon all universities to set up one centre of excellence each, Mukherjee underlined the need for inculcating quest for innovation and research for the overall development of the country.

Expressing deep concern over the declining moral values in the recent past, the president urged upon the society to reset its social compass. He said that time had come “for the society to introspect how we can respect our women and move forward”.

Mukherjee said that institutions like LPU are spreading higher education not only to the students of Punjab, but also to a large number of students from other states and neighbouring countries.

Greeting the audience in Hindi and Punjabi, Karzai said that India and Afghanistan had strong ties.

“India has shared healthy relations with Afghanistan and has contributed immensely to Afghan youth. India has given over 2,000 scholarships to Afghan students to study in India,” he said.

He thanked LPU for conferring the honoris cause degree on him.

LPU chancellor Ashok Mittal said that it was a rare occasion that the heads of two countries were present at the same event.

Mittal said that Indian private universities can make a significant mark in research and compete with foreign universities like Stanford and Harvard.