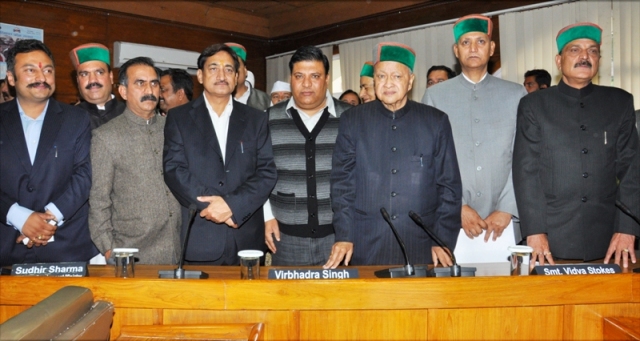 Those sworn in included are Rohit Thakur, Nand Lal, Jagjivan Pal, S0han Lal, Rakesh Kalia and Inder Dutt. In January three others, Rajesh Dharmani, Neeraj Bharti and Vinay Kumar, were administered oath of office and secrecy by the chief minister as CPS.

Responding to a media query after the oath swearing in ceremony, Virbhadra Singh said the one vacancy in the state cabinet would be filled at an appropriate time.

When questioned about the poll readiness. Virbhadra said that Congress was ready for the Mandi Lok Sabha seat by-election anytime.

The chief minister who represented the parliamentary seat before he vacated it in January after becoming chief minister of Himachal for the 6th time is scheduled to hold a bye election by June.

Rohit Thakur, grandson of former Chief Minister Ram Lal Thakur, is a two-time MLA from Jubbal-Kotkhai constituency in Shimla district. He has been attached with Agriculture Minister Sujan Singh Pathania.

Rakesh Kalia, a three-time MLA, has won twice from Chintpurni seat in Kangra. After his seat was abolished in delimitation, in the current assembly, he has won from Gagret constituency in Una district. Kalia has been given charge of ayurveda department and has been attached with Chief Minister Virbhadra Singh.

Jagjivan Pal is a two-time MLA from Sulah in Kangra district, he has been attached with IPH Cabinet Minister Vidya Stokes.

Sohan Lal, a two-time MLA from Sundernagar in Mandi district, has been attached with Panchayati Raj Minister Anil Sharma.

Nand Lal, a two-time MLA from Rampur in Shimla district, has been attached with Health Minister Kaul Singh Thakur.

Inder Dutt Lakhanpal, a first-time MLA from Barsar in Hamirpur district, has been attached with Urban Development Minister Sudhir Sharma.