Dehra Dun : Success governments of Uttarakhand, regardless of whether they were of the Congress or the BJP, have not only trampled upon the hopes and expectation of the people with punity, but have infringed upon the autonomy of the Universities, which have hit the education standards and deprived the youth of this small mountain state of competing at the national level. 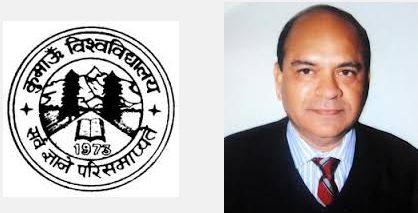 Voicing his concern over unnecessary pressure being put by the state bureaucracy and interference in the autonomy of its working, vice chancellor of Kumaon University located at Nainital, Prof Rakesh Bhatnagar resigned from his post. He has decided to return to his former institute, JNU, fallowing his decision to quit as VC.

Making his decision known to the various heads of departments and other senior officers of the University, he said that he had met the Uttarakhand governor Dr Aziz Qureshi a couple of days and informed him of his decision in a two-hour conversation. The governor asked him to reconsider his decision, but the bureaucratic interference was too much for the professor.

He said that it is the duty of the state government to give money for salary, development grants, maintenance and other expenditure to the University, but it was being stifled as the funds were being controlle3d. Things had reached such a stage that the salary for the month of January could be paid only on Feb 16.

Not mincing words, Bhatnagar said that for the appointment of nearly three dozen professors he was in touch with experts from Bangalore, IITs, JNU and even from Japan and America, but pressure was being put on him by the state bureaucracy and even elected MLAs and other representatives for their candidates.

He said that because of the negative attitude of the state government towards Kumaon University and efforts by the people at the helm of affairs to antagonize persons who are working in its interest and development so that the student community could benefit at large, was the reason that he was resigning from his post.

Bhatnagar, who took over as the vice chancellor on Dec 1 2012, submitted his resignation on May 3 and met the governor on May 9, where he discussed at length the unwarranted interference of the bureaucracy and politicians in the working of the University.

The world renowned Govind Ballabh Pant Agriculture University is also being stifled. For almost two years now, almost all senior positions, including that of the vice chancellor have been taken over and are having their say. The academic atmosphere of the University has been reduced to zero because of which the teaching and research work has been badly affected.

Apparently the governor Aziz Qureshi is perturbed at the happenings at the various universities and also the fact that the price agriculture fields of Pantnagar University, where extensive research work was being undertaken was being handed over to private builders, and told media persons that no land of the University would be given to private builders and efforts would be made to restore its old grandeur.