Srinagar: Are Jammu and Kashmir Chief Minister Omar Abdullah and Peoples Democratic Party (PDP) president Mehbooba Mufti hunting for “safe” seats for the 2014 assembly elections? The question is particularly poignant in Abdullah’s case as it would mean his moving away from a constituency that his grandfather and father have nursed since 1975 and which has gone out of the family’s grasp only once. 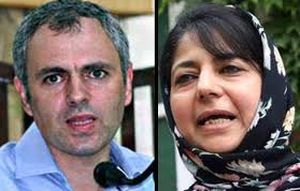 Political circles here are agog with rumours that Abdullah would not contest from his traditional Ganderbal constituency in north Kashmir, while there are suggestions that Mufti might not contest from south Kashmir’s Wachi constituency. None of them has said anything on the issue so far, but Kashmir’s rumour mill has its own dynamics.

If Omar Abdullah chooses against contesting from Ganderbal, on a subliminal level the decision would be a body blow to the ruling National Conference (NC).

Omar Abdullah’s grandfather and NC founder Sheikh Muhammad Abdullah fought the assembly elections from Ganderbal in 1975, when he returned to mainstream politics after 1953. At that time, the Congress has asked its incumbent legislator, Muhammad Maqbool Bhat, to make way for Sheikh’s ascendancy to the chief minister’s post after the Congress party supported his government from outside.

After the Sheikh’s death in 1982 his son, Farooq Abdullah, fought and won the 1983, 1987 and 1996 elections from Ganderbal. Farooq, who also served as chief minister, is currently the minister for new and renewable energy at the centre.

Omar Abdullah contested from Ganderbal in 2002 but lost to the PDP’s Qazi Muhammad Afzal. He won back the seat in 2008.

While many people in Ganderbal say Omar Abdullah has not risen to their expectations, not many would accept that there is some sort of a wave in favour of his rivals in the constituency.

“Well, there is no wave as such in favour of the PDP, but the NC’s graph has definitely gone down. There are many reasons for this and Omar Abdullah cannot be blamed for all of them; yet he could become the victim of his party’s infighting in Ganderbal,” said Abdul Hamid 63, once a staunch supporter of the Abdullahs in the constituency.

Senior PDP leader Muzaffar Hussain Beigh recently addressed a public meeting in Ganderbal during which he said Omar Abdullah had decided against testing his political fortunes from the constituency any more.

Interestingly, on the same day, NC provincial president Nasir Aslam Wani said at a public meeting in Wachi that Mehbooba Mufti was afraid of even showing her face to the people and had virtually run away from the constituency.

So far, neither the NC nor the PDP has contested each other’s claim of their top leaders deciding to look for “safe” seats in 2014.

On Thursday, Omar Abdullah laid the foundation stone of a revenue office in Lar town of Ganderbal district, where eyewitnesses said PDP and Congress buntings outnumbered those of the NC.

Lar is the hometown of the PDP’s Qazi Muhammad Afzal, who defeated Omar Abdullah in 2002 but lost to him in 2008.

Lar is also the hometown of Sheikh Ashfaq, a middle-rung Congress leader and the son of Sheikh Abdul Jabbar. Jabbar was at the top of the NC’s list of defectors in 1984, when Farooq Abdullah’s government was toppled after his brother-in-law, Gulam Muhammad Shah, staged a coup and came to power.

Insiders suggest that Sheikh Ashfaq, who gave up a police officer’s job in 2008 to contest from Ganderbal againt Omar Abdullah and Qazi Muhammad Afzal, hopes to get the Congress ticket from Ganderbal in 2014.

Whether or not the rumors about Omar Abdullah deciding to hunt for a “safe” seat are true, the very fact that people are openly talking about the likelihood of him shifting his political base from Ganderbal is not good news for the NC.

Mehbooba Mufti’s silence over NC’s assertion that she has “run away” from Wachi lends credence to rumours that she might not again test her fortunes from where she had won in 2008.