The war of words between Beni Prasad Verma and Mulayam Singh Yadav is getting murkier with each passing day. Latest in the list is the barrage fired by Beni Prasad Verma, one of the senior most leaders in the Congress ranks, when he claimed that in the forthcoming Parliamentary polls in UP, Congress would win 40, BJP 10, BSP 36 and SP just 4 seats. 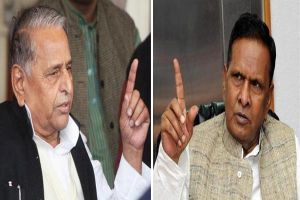 Interestingly, the state of Uttar Pradesh has got a total of 80 Lok Sabha seats, as against 90 calculated by Beni Prasad Verma.

No wonder, political pundits from across the country ridiculed the calculation and others laughed at Beni Prasad’s day dream.

The veteran Congress leader didn’t even restrain from announcing ‘post poll funeral’ of SP, a party that won the recent assembly election with a thumping majority.

The leader had previously created a storm by alleging Samajwadi supremo Mulayam Singh Yadav of harboring links with terrorists. He had also voiced that Mulayam Singh Yadav is only serving his family interests than working for the betterment of people in the state.

SP has asked senior leadership in Congress to drop Beni from the cabinet at the earliest for his irresponsible remarks over the past few days.

Interestingly, soon after the incident, senior leaders in Congress such as Harish Rawat were seen in damage-control mode. Who needs political foes if a party has got severely outspoken leaders?