Laxity in checking traffic violations has emboldened many vehicles owners from the town and surrounding area to not only disobey the law but they also pose a serious threat to the people who walk on the narrow roads of the city.

Despite the mounting problems for ordinary pedestrians, traffic police in Shimla have been turning a blind eye towards the traffic violations taking place.

Breach of traffic norms can be seen more in the areas like Sanjauli, IGMC road, Bustand, Kasumpti and many other areas of the town.

Though there is signage put up at various spots along the city roads, defining both traffic norms and penalties for any violations, however, that has not deterred vehicle owners from defying the road laws, reflecting the poor state of enforcement of traffic rules by the police.

On noticing a traffic violations, when a traffic policemen at Sanjauli was asked to book the vehicle for overtaking in a dangerous manner, the policeman brushed it off by saying, “its my duty and the vehicle number has been noted.”

Ironically the policeman neither had a traffic challan book, nor did he have a note pad or even a pen to make note of the vehicle that had breached the traffic flow on a congested section of the crowded market.

Ram Sharma, a resident of Sanjauli locality says “vehicles parked at no parking zones not only create traffic jams but can endanger lives of anyone at anytime.”

When city police superintendent Abhishek Dular was contacted regarding breach of traffic laws, he said, “random checks are done frequently, violators are booked and all efforts are being made to regulate traffic smoothly.”

When pointed about the booking of the traffic violating about a speeding vehicle over taking on a congested road section in Sanjauli, the police expressed ignorance. I am not aware of this as I have no information about the incident, he said.

Dular disclosed that each year, more than 60,000 vehicles are handed traffic violation tickets for parking of vehicles at no parking zone.

In the last 24 hours, 146 vehicles have been booked for traffic violatons in the city, said Dular. 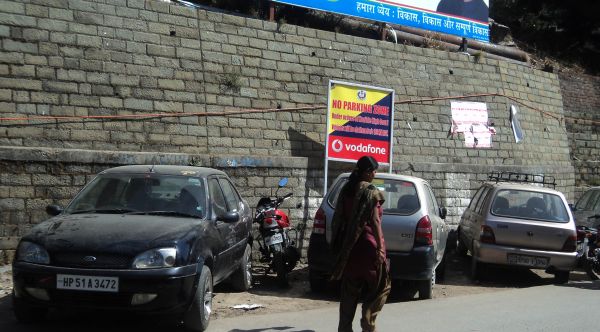