An apex court bench of Justice G.S. Singhvi and Justice S.J. Mukhopadyay said the petitioner had failed to make a case for commuting death sentence to life imprisonment, on grounds of the delay by the president in deciding his mercy plea.

“The appeal is dismissed,” the court said. 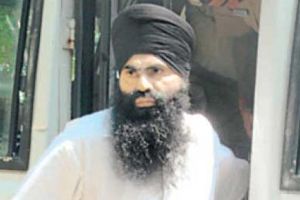 Bhullar was given capital punishment for the 1993 blast at the Youth Congress office in Delhi which left nine dead. The attack was targeted against then Youth Congress leader M.S. Bitta.

“Bhullar is undergoing treatment at the Institute of Human Behaviour in Dilshad Garden,” Tulsi’s office told.

While in New Delhi the Congress and the Bharatiya Janata Party (BJP) welcomed the Supreme Court ruling, in Punjab the ruling Shiromani Akali Dal and the Shiromani Gurdwara Parbandhak Committee (SGPC) termed the ruling as “unfortunate.

“We respect the Supreme Court judgment. We respect any judgement of any court. We never intervene in any legal system,” Congress spokesperson Rashid Alvi told.

The BJP said that the Supreme Court verdict must be respected.

Bharatiya Janata Party leader Balbir Punj said: “Whatsoever punishment awarded by the apex court should be implemented. There cannot be any exceptions”.

Senior Akali Dal leader Prem Singh Chandumajra said in Chandigarh: “It is an unfortunate judgment. We were hoping that the court would keep in mind the situation in Punjab at that time. We will appeal to the president to review the decision. We will also appeal to the prime minister to intervene.”

The SGPC, the mini-parliament of the Sikhs, said it was “disappointed” by the apex court ruling.

SGPC president Avtar Singh Makkar said: “This is an unfortunate thing for the Sikh community.”

The Congress party, which is in opposition in Punjab, reacted cautiously.

Punjab Congress president Pratap Singh Bajwa said: “The judgment has been given by the highest court of the land. We have to respect that. I have called an emergency meeting of Punjab Congress leaders to study the judgment.”

But the man who was the target in the 1993 bomb blast outside the Youth Congress office in New Delhi, Maninderjit Singh Bitta welcomed the ruling.

“Bhullar’s file kept moving inside the home ministry, law ministry and the Delhi government for 15 years I didn’t expect Bhullar will get the death sentence,” Bitta said .

He also alleged that the Sheila Dikshit government had tried to help Bhullar by declaring him “mental”.

“Today’s decision was very crucial. We bow before the court,” Bitta said.

Bitta also alleged that no one – including his Congress party – had come forward to help him.

“None was with me. The media also left me. I always asked why they (the then government) had withdrawn my security cover there was also an attack on me in 1992. My party and my leadership got frightened and left me to fend for myself,” he said.

Bitta claimed that despite his association with the Congress, some in the party had worked against him and asked him to back down in the case.

“Ambika Soni had called me and told me to back down in the Bhullar case,” he alleged, and also questioned why Kapil Sibal had represented Bhullar in the case in the past.

While hearing Bhullar’s petition, the court November 15, 2011, expanded the scope of the proceedings by taking on board all the 17 mercy petitions pending for several years before the president seeking commutation of death sentences to life imprisonment.